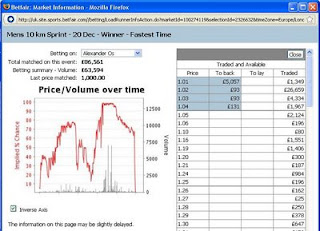 Ah, you gotta love this sport! Too bad I was watching the exciting Aus v Sth Africa cricket test instead!

Norwegian Alexander Os skied brilliantly to take the lead, despite missing one of his shots (which means he has to ski a 25second penalty loop). But then one of his teammates, a late starter Lars Berger, who only got a start when the top Norwegians Emil Hegle Svendsen and Ole Einar Bjorndalen pulled out to go home and train instead, shot clear (10 from 10), very rare from him, and took the win at any old price (was part of 'Any Other'). Usually the short prices getting beaten come from bad shooting, but this time it was simply there was a dark horse left in the field who is a very fast skier.