The Christmas Hurdle from Leopardstown, a good Grade 2 race during the holiday period. But now it will go into history as the race which brought Betfair down.

Over £21m at odds of 29 available on Voler La Vedette in-running - that's a potential liability of over £500m.

You might think that's a bit suspicious, something's fishy, especially with the horse starting at a Betfair SP of 2.96. Well, this wasn't a horse being stopped by a jockey either - the bloody horse won! 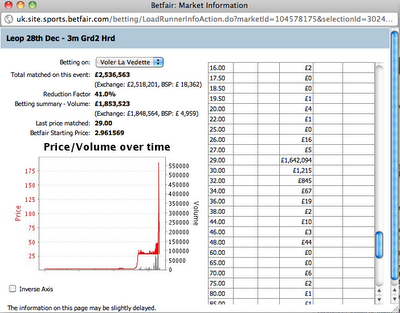 Look at what was matched at 29. Split that in half and multiply by 28 for the actual liability for the layer(s). (Matched amounts always shown as double the backers' stake, never counts the layers' risk).

There's no way a Betfair client would have £600m+ in their account. Maybe £20 or even £50m from the massive syndicates who regard(ed) Betfair as safer than any bank, but not £600m. So the error has to be something technical. However, rumour has it, a helpdesk reply (not gospel, naturally) has implied it wasn't a Betfair issue.

I would be extremely surprised if this race was paid out in full - if it is a massive customer Betfair have offered credit to (has been offered in very selective cases), then the customer is quite likely to argue technical error that Betfair should have blocked and refuse to pay up. As mentioned above, I severely doubt it's a customer/syndicate with that much in cash reserves, and the other point to remember is that Betfair TSE Ltd are now under the regulatory control of Gibraltar authorities, who don't have a history of putting the punter first. Betfair aren't the kind of company who will take the whack on the chin if it was an internal balls-up, and £23m will make a serious dent into their all-important share price.

Almost 40 mins later, and the race hasn't been settled. I doubt it will for a while yet either.