monitor several Betfair markets at once

This is a handy little tool very few people find on their own, but it's available via the Betfair Labs site. The product is called Firefox Extras. It's only available in Firefox (apparently the code is much easier to work with than buggy Microsoft creations) and it has numerous uses apart from what you see below. 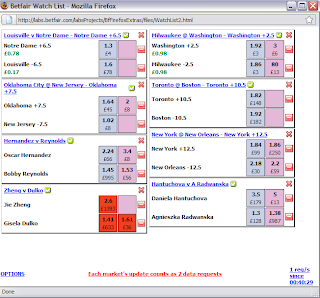 When you download the programme, you can set up a Watch List as shown above, add notes to a selection (very useful for racing) which will be retained with that selection each time it re-appears in other markets, hide runners from markets (useful during a race when one horse has already fallen and you want to see runners further down the screen) and more. Take a look for yourself. I was just playing around on a few NBA games as well as keeping an eye on some other markets at the same time.