biathlon rocked by another doping scandal

The Russians are at it again. Thinking it's 1981 and they can get away with whatever they like. Training camps being held at short notice in remote parts of Russia where WADA officials can't get visas without waiting for three months, almost no local testing etc. Shoddy, and they've been caught for it.

No articles yet with the news in English, but numerous others in various languages via NewsNow

The IBU aren't releasing names as yet, but reports link the failed tests to Akhatova, Iourieva and Yarochenko. 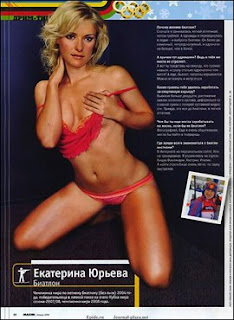 It's a real shame the Russians have to stoop to such depths when some of their star athletes look like this!

The World Championships start next weekend. Did they really think they could get away with it? It's time biathlon brought in a rule like weightlifting where repeated positive tests from the one nation kicks everyone from that country out. Otherwise biathlon will become as tarnished as cycling, and nobody wants to see that....