I must admit, I'm a bit of a petrolhead. Go back to 2000-2, I was heavily into betting on Formula 1, particularly head-to-heads. However, the constant rule changes which made driver ability a very small part of the equation eventually turned me off it. This season though, I could be right back into it.

For full details on rule changes, read this

In summary, slick tyres are back, aerodynamics are significantly different to reduce reliance on downforce and make wheel-to-wheel racing easier, engines now have to last three races and in-season testing is heavily restricted. Just look at how different the McLaren car looks, the wings are a big change from previous years, front and back. 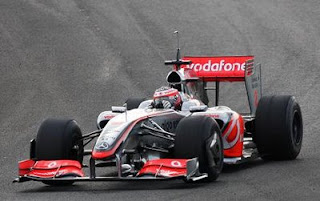 New team, Brawn GP, formerly Honda, set the testing tracks alight last week, to such an extent that PaddyPower made Jenson Button favourite for the Drivers Championship! I had to check it wasn't April 1st...

The away races in Australia, Malaysia, China and Bahrain often tell a different story to the rest of the season. It's not until the teams return to Europe that they can really make changes to the cars and sort out early problems. F1Punter mentioned yesterday in his preview that Hamilton was nine pts behind Raikkonen last year after four races, yet ended up 23 pts ahead by year end. You don't win golf tournaments on the first day, nor drivers' titles in the first month.

The drivers market is wide open (Betfair - Hamilton 5.9, Raikkonen 5.9, Massa 6.4, Alonso 6.4, Kubica 9.8, Button 11.5) but I just don't get into futures markets these days. Head-to-head betting on race day will have my focus. Hopefully the switch to BBC coverage in the UK will get the bookies offering even more markets, and not just matchups between drivers of the same make.