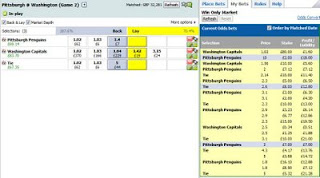 I'd never tried trading on (ice) hockey before. There's an 8 second delay on Betfair with no market suspension when there's a goal, but on the flipside, limited liquidity means the potential margins are much better.

Thought I'd have a dabble because it was on TV while I was up late studying. Started by offering a book at about 115%, then worked a position from there. Never really had a big risk against me, the tie has to be worth laying when you have an average of five goals per game. Logic says it's highly unlikely a playoff game will trade like a 0-0 football game.

Sergei Ovechkin scored a hat-trick for the Washington Capitals, who came back from 0-1 and 1-2. I've got a new hero :)