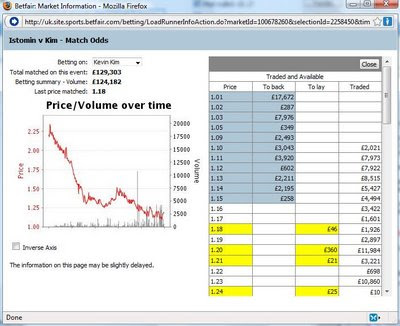 Last week against Crivoi in Bastad, he turned up injured and put in little effort. Now the same thing is happening again in Indianapolis, against an even weaker player in Kevin Kim. Kim backed from 2.34 down as low as 1.10. I dare say bookies won't be covering his first-round matches for much longer...

Crivoi vs Brands also looked very fishy today. The market went sharply against Crivoi in the hour before play started (1.74 to 2.24), then after winning the first set and going a break up in the second, he was still only marginal favourite (1.9). But, he had traded as low as 1.3, which suggests injury was involved. There were a couple of long breaks between activity on the scoreboard which suggests treatment from the physio - but, as commented by a colleague, that would be part of the script anyway if the match was arranged. Brands wins 4-6 6-4 6-1, not a surprising result on the cold form, but the betting movements were much different.

The ATP could have something serious on their hands if they don't act fast, that's four suspicious matches in a week.

UPDATE: Istomin v Kim match just plain odd. Istomin favourite at 4-4 in the second set despite losing the first. Serving at 3-3 in the final set, he is matched as low at 1.15. Based on pre-match prices before the heavy betting game in, that's still odd. Is the match fixed or are there just people with a hell of a lot money influencing the market AS IF it's fixed....???