what a great day for biathlon trading 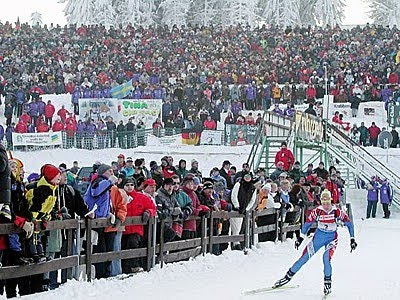 With so many football matches out of action, it's a perfect day to get into a true winter sport - biathlon! It's on Eurosport today, kicking off at 11.45am, but best of all, as it's a sprint race where competitors go out one-by-one (think cycling time trial), you won't miss anything by getting involved a bit later.

Conditions in Oberhof yesterday were windy and foggy for the women's sprint, making shooting rather difficult - which is not a bad thing for traders. Uncertainty evens the field a little, increasing the chance of a big-priced winner, or at the very least, volatility in the winner market.

Norwegian superman Ole Einar Bjorndalen is the favourite as per usual, and he warmed up on Thusday with a win in the realy for Norway. He missed one shot (of 10), you can see the stats from that race here.

Ski times and shooting stats give a good guide to what you might expect in this race. When the guys who ski better than they shoot go too hard trying to establish a lead, their hearts race which makes it much harder to hit the targets, while those who don't ski hard enough concede too much time and have to rely on others missing targets. Every target missed in this event means a penalty loop must be skied, which takes around 25 seconds.

Never be afraid to lay the favourite in-running. I've seen 1.01s beaten in this sport, the nerves set in and the final shoot (standing, often with a cross breeze, maybe some snow, and a racing heart) becomes very tough. Watch for the market to swing with every shot missed, and listen for the crowd reaction, especially when the home biathletebs are on the range.

This is the official live site - it will be at least as fast as Eurosport, and can cover all the competitors at once, rather than just who is on screen.

The season really gets serious from here on, so even if you're afraid to bet on it today, watch it closely and get an idea how it all works. As we get closer to the Winter Olympics in Vancouver, the races get better and better.