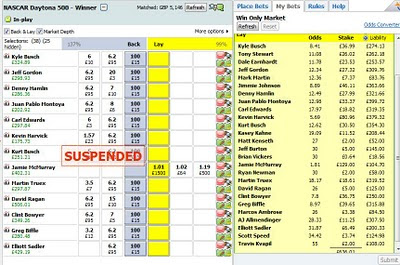 Call me a redneck, but I do love the Daytona 500. With results like this, how could you not?

It's not the first time either, that's three years in a row for me, I blogged about it last year as well. Haven't had time to do much trading of late, glad I made the effort tonight :)

Low liquidity events with multiple chances work best for me. The event unravels slowly over a few hours (events of similar style include televised LPGA and Seniors events). Not many punters, and the ones who do get involved will take a reasonable price for small amounts, but still allowing to keep a decent over-round or margin. I laid 26 of the 38 selections and just kept on doing it throughout the race. So if keep your mind on the job, you can keep laying and laying without taking much risk. And speed of the pics here made no difference at all, I watched most of the race off a live stream which was probably 20secs behind.

But unfortunately, this is the only event of the year that has enough interest to bother trading, plus it's a restrictor-plate (speeds are limited as at full speed on such long straights, cars could lift off in bumped when in a straight line) race, meaning every car is in with a chance. On shorter tracks, that doesn't happen and there are less winning chances.

As a backer, this race was virtually impossible. Being able to use a betting exchange like Betfair made all the difference.