Too many tidbits, not enough time for full-length articles...

The mystery in the Betfair/Danny Nikolic/Neville Clements inquiry in Australian racing gets deepers with professional punter Neville Clements being warned off all Australian racecourses indefinitely, no doubt as a refusal to share phone records which will incriminate him. There is plenty more to come in this story. Let's hope if a conviction is warranted, then it is reached, unlike the farcical scenes of the Fallon case in the UK a few years back.

It's March, so Italian football is looking dodgy again. On the weekend we had the Chievo-Cagliari boat race which went as planned, but last night a Serie B match was taken off the board by all and sundry but then didn't go as planned. All the money was for a draw between Vicenza and Crotone, but the away team won 2-0, even with 10 men! Did the authorities tell them they were being watched very closely, or was it the case of a few punters trying to spoof the market and reaping the rewards? It has happened in tennis a few times now, and everyone will believe it when the grapevine says an Italian game is fixed....

Centrebet have explained their lack of announcement to the Australian Stock Exchange re potential takeovers by way of confidentiality. Sportingbet have announced they are not going to proceed with a bid, and I seriously doubt Hills will go ahead either. Do Ladbrokes have the cash to buy them out?

Cheltenham was massive for bookies and a fast-track to the poorhouse for most punters. When the placepot pays £41k on Gold Cup day, that's not a good sign for punters. The High St bookies say they won about £60m off a hold of about £600m - I reckon they've toned that down a bit after they were attacked for being greedy and irresponsible when they scooped the pool on the Grand National last year, when Mon Mome won at 100-1. But the poor old UK Tote held a rather poor £10m for the week - that's 1.67% of the estimated industry turnover for the week. Why would anyone want to buy them when they are that irrelevant to UK racing? Sure, they could be a bargain if they were valued like that, but the Govt has a very unrealistic expectation of them. They are a lame duck. 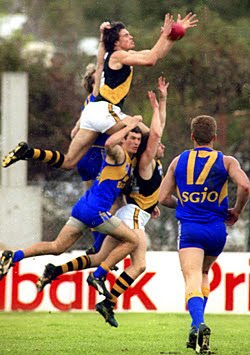 Big news of the week for sports fan is real footy, Aussie Rules, starts tomorrow. If you're in the UK like me, you can watch a few live games of AFL each week on ESPN UK. My poor suffering Richmond are in the opening game, against the arch-enemy, Carlton. The great man, Richo (featured in the photo), won't be there unfortunately, he retired in the off-season and will be farewelled with a lap of honour before the game.