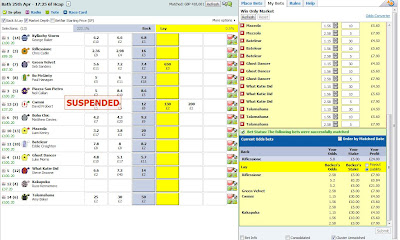 Must admit I don't do this on Betfair too often anymore, mostly because work gets in the way, but partly because of the late non-runners which vary your prices (meaning you can't set up a bot to pre-load them all in the morning) and also I can't be bothered taking the stats I need to 'perfect' this strategy as I am certain that different tracks and different distances will work better with varied prices.

But today I felt like a dabble on the last couple of races and I had a vague recollection of some luck at Bath a while ago.

I laid all at three prices 2.58, 1.56 and 1.15 for varying stakes. The 2.58 level I like to use on bigger fields with higher-priced favourites (fav was about 5.5 on this race). The theory behind that is laying three horses at <3 will make a profit, but ultimately the profit comes from the low price. The small trade on Riflessione was just to be able to watch the live video.