This week we have the ATP event in Newport, a really poor standard tournament, the only one on grass after Wimbledon and it clashes with Davis Cup as well, so few decent players bother and most European challengers would have better R1 matches. So far this week, we've had Richard Bloomfield, a British qualifier ranked outside the top 500, with a 1-10 record in ATP events backed off the map yesterday against Christophe Rochus, a veteran who has been losing R1 of Challenger level events lately.

(Forum extract) "Rochus topping up the pension fund yet again. Bloomfield odds plummeted from evens to 1.25 before the match. $1.4 million matched on betfair, and nearly every bookie pulled the market. Was funny inplay, Bloomfield was something like 1.20 to win 2-0 even while it was on serve in the first set."

Bloomfield's only other win at ATP level was a couple of yrs ago at Wimbledon when he played Carlos Berlocq, and similar betting patterns occurred. NOTE there are no allegations here against Bloomfield, it's just coincidence he has faced two guys with no interest whatsoever in winning, they just turned up unfit and claimed their R1 loser's cheque. 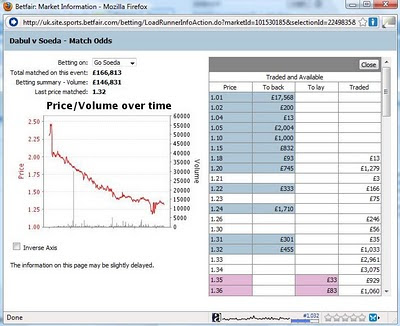 Doesn't look like Mr Dabul will be trying too hard...

Or perhaps he was... Dabul won 7-5 6-2. I didn't catch the live trading of the match, but perhaps it was a 'spoofed' market where a big punter systematically crushed the price on Betfair and a few other bookies, sending the price on Soeda tumbling, and then all the sheep came in and forced the price down, down, down enabling the punter/syndicate to trade out for a very handy profit....