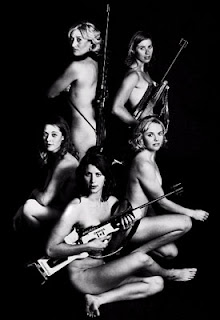 (The Canadian women's biathlon team posing for a fundraising calendar in the lead-up to Vancouver. Image from CTV.ca, Rachel Boekel)

Tomorrow marks the opening of the IBU Biathlon World Cup season, with the Women's Individual race at Ostersund in Sweden, the first of six events spread over five days. You may wonder why an Aussie who is not particularly fond of cold weather (or guns) loves the sport of biathlon so much. Read on....

"The combination of two very contradictory disciplines, skiing and shooting, in the same competition confronts an athlete with a very demanding challenge. Cross-country ski racing required intense, full out physical exertion over an extended period of time whereas shooting demands extremely fine control, stability and focus. When athletes arrive at the shooting range, they have to shoot at very small targets, with a racing heartbeat and heaving chest because the clock is running even while they are shooting and a missed target results in a penalty." (IBU Media Guide)

It's the perfect sport for betting in-running. Competitors have to strike a balance between skiing too hard (they'll be out of puff and heart racing too much to shoot accurately) and saving themselves for the shoot (ski times too slow). There are some red-hot skiers who are average shooters, and precision shooters who are too slow on their skis. Imagine skiing so fast you have a 20 second lead coming into the last set of five shots, in a standing position (much harder than prone), your heart is racing, there's a strong cross breeze and with a bit of snow falling, and your nerves are not your best asset. Just like there are some golfers you always want to oppose when they come down the final hole with a one-stroke lead, biathlon has very similar traits.

Weather and course conditions play a big part in it - heavy snow during the race gives a big advantage to those starting early as can sunshine which can melt the ice. For sprint and individual races where athletes are individually timed and start separately(like a cycling time trial), the best racers usually start in the middle of the pack (often 120 starters).

This season will be better for betting as there will be no Olympics at the end of the season, which saw a lot of athletes peak at different times last season, missing some events and racing in others. Magdalena Neuner (below) is the glamour girl and star of the sport - super-quick on her skis, but can be prone to bad days shooting. 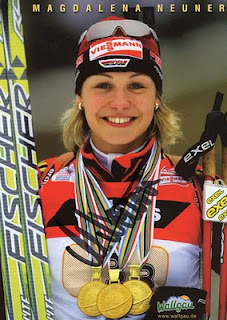 My advice is watch and learn. The coverage is live on Eurosport, the commentators are quiet knowledgeable and at the right level to explain it to newbies. You'll soon get an idea for who are the leading biathletes and what factors affect them in a race. The betting markets in-running on Betfair are highly volatile - miss a couple of shots and a 1.15 shot can suddenly drift out to 100, it's a brilliant sport for trading. And if you're keen to give it a go, follow me on Twitter (@borisranting) - I'll be tweeting throughout any event I'm trading live and will be happy to share knowledge of this fine sport.