the wash-up from day 1 at the Gabba 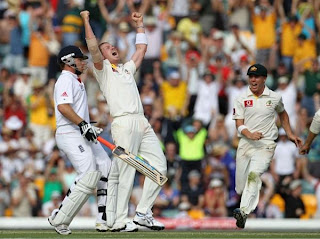 The obvious highlight of the day was Peter Siddle's glorious hat-trick. I'd had a bit of a snooze on the couch for a couple of hours, only to be woken by the first wicket, then woke up properly when Prior was skittled and then was jumping around the lounge room when Broad was out first ball. Great performance from the birthday boy, whose selection was questioned by many (not me though, he's a Victorian, thus he is champ!)

Despite England being knocked over on day one, the pitch didn't seem to have any demons in it. The Australian bowlers as a whole performed well, with the exception of left-arm tripe bowler Mitchell Johnson. Expensive and didn't see him threaten at all. The others were discplined, bowling the right line and the right length for the majority of the day. If you put it in the right place often enough against batsmen who aren't the world's best, they'll get themselves out soon enough. Credit to Alistair Cook - he looked awful for most of his innings but still ground out a tidy 67. Unfortunate for me as he was the only batsmen I sold runs on (37) all night. The one negative of Siddle getting so many wickets was Hilfenhaus was denied his ahare - backed him in a bowling H2H against Anderson.

We all know the Aussie batting line-up isn't as invincible as it was a decade ago, so it's highly possible the home side could fall to a similar total. A bit of cloud to assist movement in the air, a firmer pitch to give more bounce for Swann and you never know what might happen. Australia's big weakness in recent years has been the inability to turn the screw when taking the ascendancy. Siddle isn't a world-beater so if the England bowlers can learn from his tactics, they are right in this. A good night's rest and re-evaluation in the England camp and we could have an exciting first session.

1.44 on Australia at this stage is pretty short, there's plenty more life in this match yet. Two ways to play it as a punter - lay Australia expecting them to drift a bit with wickets, or back the draw expecting Australia to score runs and occupy the crease. The draw will shorten, forcing England's price right out, and then you can lay it back for a small profit.