Small fry punters and bookmakers caught up in this one by the looks of it.

6 held for betting during India-SA ODI

Six persons were arrested in New Delhi for allegedly indulging in betting during the One Day International between India and South Africa on Friday. The gang was using website www.betfair.com for obtaining the latest fluctuating rates for the stake and betting on the cricket match, Chhaya Sharma, Deputy Commissioner of Police (Outer), said.

Stake money worth Rs 72,000 was recovered from the house in Rohini Sector 16 in Outer Delhi.


Gotta love how Indian journalism traditions forces them to list the entire website address rather than just referring to them as Betfair. Surely not publishing the URL would be a better idea if it was banned there?

Meanwhile, huge amounts were being traded on South Africa at 1.01 today before Yusuf Pathan scared the willies out of the money-buyers with 105 runs off 74 balls. 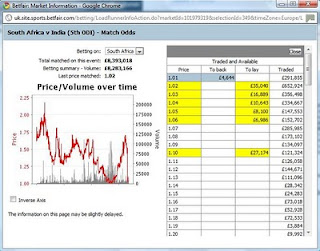 Luckily for them, Pathan got out and the queue to jump off the bridge disappeared....