Time for a new tack perhaps...

So once again England are ridiculed and isolated for making a stand against the self-righteous clowndom that is the Federation of International Football Associations. Pillars of the international anti-corruption community like Benin, Congo and Fiji yesterday stood up to reject the English FA's claims of corruption in FIFA. Of course, the representatives from these economic basket-case nations fly business class, live in mansions and drive Rolls-Royces because of their own individual business prowess rather than any untraceable cash which has fallen into their hands.... 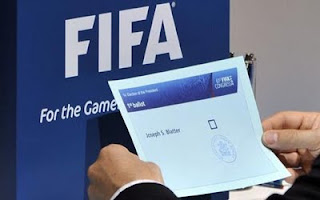 It's obvious continuing to complain and target FIFA with accusations and investigations isn't going to get anywhere. Blood is thicker than water, these guys work together to keep people they don't like on the outside and see themselves as above western ethical standards of business. So now it is time to try to a significantly different approach. Do things for the benefit of the sport, regardless of whether FIFA endorse them or not, such as:

- Introduce post-match video reviews of incidents, whether or not the referee has seen them and dealt with them, to deal with diving, vicious tackles, Rooney's elbows etc.

There are numerous stages on which these can be tested, it doesn't have to only be on the Premier League if the argument there is it will change the game too much. After all there is no let-up from televised football in Britain, so just get on with it and leave FIFA to keep fannying about it and patting their own backs about how good a job they are doing.

Finger pointing will keep England on the outer for a long time to come, so what exactly have England got to lose anyway?