Idiots of the year awards

Following on from earlier in the week....

Corrupt Bastard of the Year: It can only go to Sepp Blatter.

When faced with allegations of corruption, what do you do?
1. Get the accuser, and main rival, kicked out of FIFA because he is either as rotten to the core, or the only one who isn't, so therefore he must be removed.

2. Sacrifice an entire region (CONMEBOL) because they hold little power and blood must be shed, despite them only following the examples of their peers. CONCACAF is seemingly several times more corrupt but they hold far more power in FIFA voting ranks. 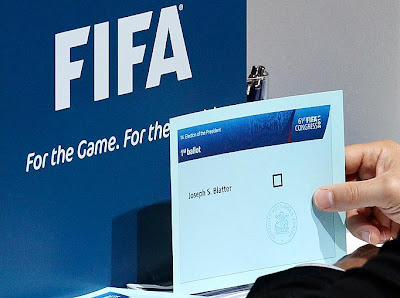 3. Hold an election where the ballot paper has only one name on it. Not even Kim Jong-Il (RIP) was vain enough to do that.

4. Go to the most corrupt country in the world, Zimbabwe, and lecture players about the evils of match-fixing and how any players caught being involved in corruption should be severely punished.

5. Blame every allegation against you on being a fabrication of the British media, who bear a heavy grudge against losing the bid for WC2018.

6. Make a big song and dance about bringing in a corruption investigator...then not allow him to investigate anything in the past.

And then there's the ludicrous 'shake hands and it will all be better' response to racism.

Clueless Sports Body of the Year:

The ICC, for their quest against spot-fixing making headlines around the world with the gaol sentences for Salman Butt, Mohammed Asif, Mohammed Amir and the fixer himself, Mazher Majeed. The only problem was, the ICC had virtually nothing to do with the detection and capture of evidence, it was all done by a now-defunct newspaper! The ICC's response to the verdicts - schedule more meaningless international matches and let the BCCI run the show as usual.

The English FA. Always trying to take the moral high ground with FIFA and UEFA over issues such as corruption and racism, yet they allow John Terry to play on and keep the captaincy. In any other job, he'd be suspended immediately while under investigation. Destroys their moral arguments vs FIFA and UEFA.

What award do you give British/Irish racing - so many good stories, so many blunders.

The case for good:
- Frankel, Long Run, Kauto Star....
- Mickael Barzalona showboating before the finish line in the Derby
- The stiffness of the race-fixing penalties
- Increased exposure via Willie Carson on I'm A Celebrity and Wayne Rooney buying a horse with Tom Dascombe. Some might class the exposure bit as pointless wank but it gives vital positive exposure to the sport in the non-racing press which has had to endure, and will naturally highlight the section below.

The case for bad:
- The whip rule - the timing of the announcement (days before the new showpiece, QIPCO Champions Day), the severity of the penalties at the minor infringement levels and the refusal to accept that horses/riders which don't cheat are still penalised (winner should be thrown out every time otherwise you are encouraging cheating to win - the rule is inconsistent and toothless without that addition). I'm not against the concept of the change, but the implementation was appalling.
- The BHA wasting yet more hefty legal fees on challenging the ruling on Betfair customers not being bookmakers (pay a lawyer a lot of money and they will happily tell you they can prove the Moon is made of cheese)
- Continued resistance by course managers to use traffic cones/barriers etc to stop jockeys taking the wrong course, Willie Mullins giving a firm 'screw you' to punters by refusing to give news on status on Hurricane Fly for the Istabraq Hurdle (if a horse is nominated, the trainer should be compelled to make all information relating to health of animal public, if penalised if found to be duping the public)
- The inadequate penalty giving to Sam Waley-Cohen for pulling up a horse a lap early then lying through his teeth rather than admitting he fucked up, followed by his penalty only applying to amateur races which he doesn't need to ride in any more given he rides Long Run, is loaded and is far better than anyone else in amateur ranks - Obsession with fixing the SP system when there is one bad race a year against what is a solid system overall while at the same time horses with a run of duck eggs next to their name can miraculously have a major form reversal on the same day as a huge betting plunge but that apparently doesn't cast a bad light on the industry.

- And Paul Roy, most to blame for the top-level incompetence, is still in charge.

Head in the Sand award

The WTA for, like the ATP and ITF, being in denial about how big tennis betting actually is. Betting is evil, we can't be seen to promote it.... Just this week, they have announced a great new broadcast deal with the Perform Group - whose client base is predominantly online bookmakers!

Have I missed any? I haven't got any international names there. Feel free to nominate them in the comments....