The football match-fixing scandal reared its ugly head again on Monday this week, and Sky Sports News were desperate for someone to interview. They obviously couldn't track down Declan Hill (I believe they spoke to him on Wednesday), author of The Fix, so my phone kept ringing until I said yes. Via this blog, I've been interviewed/quoted by BBC Radio 4, AFP, Sports Illustrated and France 24, all on the subject of match-fixing.... and paid sweet FA by the way, but it all helps the profile!

Probably a bit naughty to post the clip publicly on YouTube so please allow me the ego scratch of a couple of snapshots instead. The full interview was about six minutes at 5.30, the hourly rotation clip was edited down to about a minute. 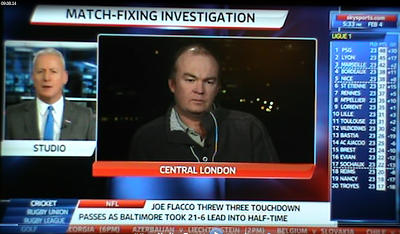 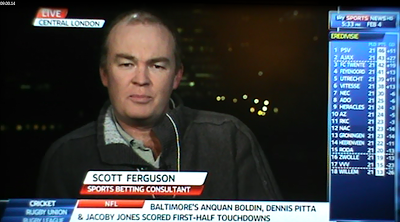 What did I say? Mostly that it wasn't surprising at all and that despite the man in the street thinking a fix is usually a shock result like Blackburn winning at Old Trafford, it's far more likely to be a favoured team winning well. Think about it.... it's less obvious, fewer people need to be bribed - just a few to ensure the team given very little hope play no better than expected, and the outside world are generally none the wiser. The 'best' criminals, or more correctly, those who are hardest to catch, are those who cover their tracks well and do their best to stay unnoticed. These 350+ matches in question weren't World Cup finals or blockbuster games - the vast majority of them were low-profile matches with the occasional venture into higher grade football being 'dead' rubbers, where at least one of the teams had nothing to play for. The other common type of fix is the total goals play. Buy off a dodgy referee and have him blow for a penalty at the merest hint of contact inside the box, particularly in a meaningless international friendly. These matches are usually written off to managers experimenting with formations so nobody gets too worked up about it if there's a half-credible explanation for anything that happens.