Day three of Punchestown and the livers are starting to take a pounding, not to mention the wallets! If you do head over for the week, the best advice I can give is pace yourself! Once again we have some top quality racing mixed in with some very difficult handicaps. Please welcome another Irishman making his writing debut for the blog, Kieran Kenneally - @kierankenneally.

The highlight of day three at Punchestown is without doubt the Ladbrokes World Series Hurdle. It's hard not to view it as the big match up between Solwhit and Quevega that everyone is looking forward to but the support cast is also strong. 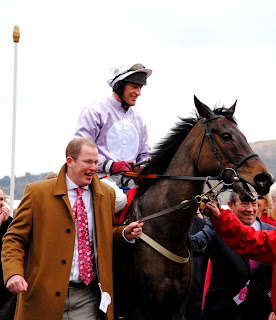 The two superstars have met previously, over two miles on heavy ground at this track 1-5-09. Solwhit came out on top that day giving 5lb and just over a three length beating to the mare. Quevega will have 7lb in hand for this renewal.

It's hard to know which horse is more suited to three miles, as they both seem equally happy at the distance and all ground conditions come the same for both horses. It was interesting to hear Willie Mullins describe Cheltenham jokingly as Quevega's "prep" in his weekly column, because that's how the race seemed to me.

Some commentators that day saw the race as another example of perfect timing by Ruby Walsh but to me Quevega looked in need of the race and only just got the win in a relatively weak race. As she gets older she may need extra racing to get race fit, and I can see her improving considerably for the Cheltenham run. She will have to!

Of the challengers Zaidpour, Holywell and So Young are all very good horses but would seem to be playing for place money at best. Of that trio Holywell has had an excellent season, winning a big handicap at Cheltenham and running a very credible second to Solwhit in the three mile Grade 1 John's Smith Liverpool Hurdle at Aintree. He was comfortably held by the winner that day and his general level of form is below the standard needed here.

Reve De Sivola has had a great season winning the Cleeve Hurdle at Cheltenham and the Grade 1 Long Walk Hurdle at Ascot. If he could reproduce his run at Ascot when beating Smad Place by 14 lengths on heavy ground, Reve De Sivola would be a real threat.

The only runner is Whatuthink and he's already trading in triple figures on Betfair.

In conclusion Quevega in receipt of 7lb and with extra recovery time between her races is put up as the Nap of the day at 13/8. Those looking for a bit more value might consider Reve De Sivola ew at around 8/1.