Champion Hurdle Day at Punchestown tomorrow and the appearance of Irish superstar hurdler Hurricane Fly. But is he up to the task? Kieran Kenneally @kierankenneally returns...

A few weeks ago I was really looking forward to the Rabobank Champion Hurdle at Punchestown tomorrow. My anticipation was based on getting good fast ground and a belief that Hurricane Fly is vulnerable on that surface. Here we are now on the eve of the race with soft ground, a small field and a 1/3 favorite! So where is the value?

Rock on Ruby is a top class horse who would probably have won a second Champion Hurdle at Cheltenham this year if the ground hadn't turned soft. Hurricane Fly was in all sorts of trouble that day with a mile to go. Flat out and with his head hanging to one side, he simply couldn't go the pace of the leaders and wouldn't have caught them at all if the ground was fast. The ground was soft and the rest is history. All seven of Rock on Ruby's wins have come with the word "Good" in the ground description and on soft ground he makes no appeal!

The horse that does appeal to me and in my opinion has been laid out for the race is Rebel Fitz! He has been first or second in 14 of his 16 runs, has plenty of experience on right handed tracks and loves the ground. His Galway Hurdle win when he gave 19lb to Cause of Causes is top class form. That horse went on to win a big handicap at Ascot and also beat a good Willie Mullins yardstick in Midnight Game giving that horse 1lb. Excuses can be made for Rebel Fitz's last two runs. His second to Tarla was his first run in five months and was essentially an excellent prep. His second before that to Captain Cee Bee when beaten 11 lengths was not his true running as he had previously beaten the same horse on more than one occasion on similar terms.

Thousand Stars is a top class horse, better over further but has been beaten by the favourite every time they meet.

Midnight Game on a line through Cause of Causes is about 20lb inferior to Rebel Fitz!

So Young has proved a decent horse at Grade 2 or Listed level but is below this standard.

Mister Benedictine would appear to be entered as a good day out for the owners and needs other horses to fall or massively under perform to pick up sixth place money.

It is hard to criticise a horse like Hurricane Fly, he has done nothing wrong. A small glimmer of hope for us is his trainers desire to send him to France over three miles for their Champion Hurdle. Maybe he's left a bit of work in him. Who knows? 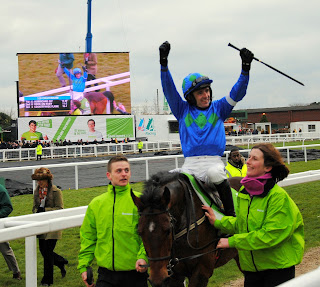 In conclusion I believe Rebel Fitz can step up to another level in his career and is good value at 16/1 to grab the each way money in this and maybe even put it up to the favourite!