Take a crack at the Colossus

I'll preface this by saying I'm not the biggest football fan in the world, however as you might have guessed from my blog name I love a punt, love most sports and love having a crack at huge pool bets. Previously they've mostly been restricted to horse racing, now we have a format to win a mint on a bunch of football matches. Naturally, it ain’t easy!

Let's look at this week's Colossus coupon. Off the back of a Champions and Europa League midweek schedule, I had hoped to take on several of those teams, but the shrewd chaps picking the card have avoided most of them! I'm going for where the big money is - if there's £10m up for grabs, why waste time attacking pools to win a few grand?

Have a crack yourself by signing up at ColossusBets and use my Refer and Earn code - RAFMRN9VW1. Just for using that code, you will get three free chances to win the £10m Colossus, after making a deposit.

A clash for the ages, 19th vs 20th! Now those table positions don't mean a great deal after just four rounds, but these clubs have largely played mid-to-bottom half teams so far, bar Sunderland's defeat by Arsenal last weekend. Brom have only conceded four in four, while the Black Cats have leaked six goals in their past two, including three to Palace.

West Brom have won this clash six of the last seven times, and of the four at home, the for/against is 10:1. Eight of the last nine meetings have gone over 2.5 goals. They might have only scored once this season, but I think this is the week they break the shackles.

Tenth host ninth, just eight goals between them after four rounds. The Hammers haven't won since picking off Cardiff on their Premier League debut while Everton pinched a goal against Chelsea who probably had their mind on Champions League. Since Andy Carroll joined West Ham, he has proved pivotal to their winning chances. With him in the team, their goals per game average is 1.36, without him, just 0.89, while goals conceded stays the same at 1.27/1.28 (stats via Football Form Labs). And that goals without him figure gets even worse if you remove a purple patch mid-last season of seven goals in three. In their last 13 matches without the long-haired frontman, the Hammers have scored only eight times.

Chelsea haven't scored in their last two EPL matches on the road, but will relish the return to Stamford Bridge. Their injury list is minimal so they have plenty of resources to call upon even after playing midweek. This local derby is always tight at the Bridge, it's not since May 2009 that Chelsea won by more than a goal (although Wednesday's loss to Basle sparks fear of an instant response). With Bent, Berbatov and Stekelenburg likely to miss due to injury, I can't see past a low-scoring home win. 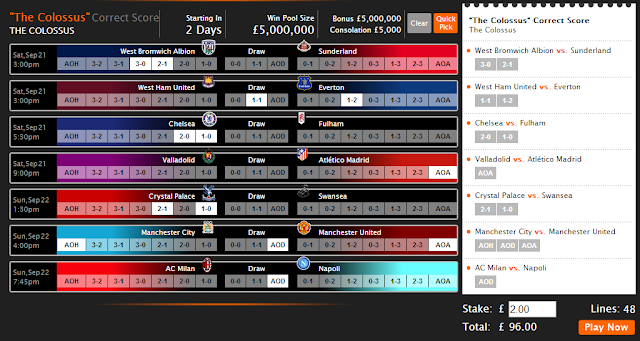 Saturday's night late game in La Liga pits 12th against second. Atletico won 3-0 at Valladolid last season and are scoring for fun at the moment, putting three past a much stronger rival in Zenit St Petersburg during the week. More goals! With a bigger ticket, I'd probably add 3-0 as well.

If I'm still alive at this stage then it's probably worth thinking about a hedge... but then again, the Sunday EPL matches are the ones I want to go wide in. If I did hedge at this stage, it would be to take my stake back and a little bit more, leaving plenty to trade with to play with if I got down to the last match.

Tough Sunday match to decipher, Swansea will start favourite based on Palace's lengthy injury list and the Laudrup factor, but they will be playing three matches in seven days. When in doubt, side with the home team.

EPL matches between the elite clubs seem to be either boom or bust, such as City's glorious 6-1 away win in 2011 or drab 0-0 affairs (especially when Mourinho plays away). Will either manager be prepared to put it all on the line this early in the season? Both teams were in fine touch in front of the net during the week and tensions will be high so I'm taking the higher scores.

A classy pairing of Italian clubs, both coming off successful Champions League fixtures on Wednesday. I've tactically chosen this match to be the skinny leg. If my ticket is still alive, I'll be hedging significantly – I don’t have the fingernails to watch a match with so much riding on it! Six of the last nine clashes between these two sides have ended in a stalemate, but both sides like to dispel the myth of boring Italian football, so I'll take the high scoring draws.

Celta Vigo and Villarreal appear quite evenly matched and not too focussed on defence. Any Other Draw.

Real Madrid are starting to click now and Getafe are yet to score away this season. In Real's last three home wins over Getafe, they have scored four. This could get ugly. Any Other Home.

Valencia and Sevilla are former leading Spanish clubs now struggling at the base of the table. Both teams have had three of four matches this season with at least four goals being scored. Could go either way so Valencia 3-1 and Any Other Draw.