The times they are a-changin'

Far too long between my industry updates so buckle up, this will take a while to read.....


Stan James have announced they will making a series of redundancies in their trading department as they move further towards automated trading. As I tweeted yesterday, my only surprise to this news was that they hadn't fully automated their trading operations already. Every firm uses automation these days in varying degrees. Do you honestly think they manage 100+ live events manually? The prices will be generated by an algorithmic model (and/or external feed) and the trader will monitor the feeds and bet ticker to check everything is in order. These guys (SJ) are top of the pile when it comes to restricting clients/shutting 'unviable' accounts, it would suck to be a trader there. Controlled by beancounters, laying very little genuine action, and now Stan James, one of the original offshore rogues, will have to pay tax on all bets from the UK like everyone else.

Will they go the same way as BetVictor, the original offshore rogue, who last week announced Michael Tabor upping his share from minority shareholder to full ownership and Victor Chandler was stepping down after 40yrs at the helm? It might have been Victor is ready to retire after so many decades at the helm and being in those ridiculous TV ads but you have to think it is closely linked to the impending tax changes.

The Scoop6 has provided a massive boost in interest in British racing recently. I ran a jackpot-chasing syndicate where roughly half of our £12k pot last week came from abroad - nations where totes are very strong. If Totepool's new owners Betfred focused their efforts on improving the technology behind the Tote - opening major race pools the day before so demand was able to be spread; focusing on boosting race-to-race pools to generate far higher churn (there's only one Scoop6 per week and it ties up your money - that doesn't help turnover); being able to place more than single line or box trifectas on their website (only Betfair and BetVictor let you bet multi-combinations, the standard international way. You're never going to grow a pool restricting punters to a handful of lines); integration of international pools; integration of Betfred and Tote technology on track (currently hopeless despite being right next to each other); guaranteed pools on certain events to keep people interested (our syndicate was set up purely because of the huge pool, wouldn't touch it again until it was in the millions with so much 'dead' money in the pool)..... who knows how successful they could be. So much for them to do, the concern is whether Fred has the desire to invest heavily in it to fight a battle that they might not win. They tell me a lot is going on in the background, we shall see...

Speaking of racing, my regular target Peter V'Landys, CEO/Grand Emperor of Racing NSW is crying about the NSW Government no longer being willing to hand over $10m for prizemoney to boost Sydney's newly-resuscitated autumn racing carnival, The Championships which made a total difference of bodies through the gate of zero. (Actually that's a bit harsh, there probably was an increase, but you could still drive a bus through the place without many casualties. Try that in Melbourne at a proper racing carnival!). Governments in Australia are hell-bent on slashing costs and telling everyone there's a debt crisis (there isn't, Australia's debt is very conservative as a measure of GDP, and expecting anything less than that is like expecting the public to all pay for their houses fully, in cash, before they move in), so with far greater concerns to the public such as health, science and education budgets being slashed, would racing ever be exempt? Not a chance. Oh, and he's still moaning about the NSW Govt taking more from TAB taxes than Victoria. Cry me a river, try getting some people through the gate for a change and stop blaming corporate bookmakers for your poor accounting and business foresight! V'Landys completely disregards the punter's right to a more competitive tax rate (TAB takeouts are the same as originally set back in the 60s, without the benefit of computerisation, digital platforms etc), so why should he get any more to piss up against a wall in prizemoney, attracting largely the same horses which would have been there anyway? (True, it was year one, on very short notice, but you're still stuck with the same old problems - Sydney weather in April, fitting in with international racing calendars and competing against the winter football codes).

Ladbrokes' acquisition run in Australia continues, adding the BetStar brand to their range, a firm founded by Alan and Michael Eskander. Paddy Power and William Hill regularly eschew the strength of the Australian market in their market announcements, Ladbrokes will undoubtedly be next. And a little surprisingly given their long-running poor performance in the digital sector, innovation has been their USP in Australia, launching a debit card for quick withdrawals, the first of its kind.

As mentioned recently, Betfair Australia appears to be on its last legs. Rising cash grabs from racing authorities and an offer from 50% shareholder James 'the beach boy brawler' Packer to buy Betfair Ltd out seem likely to seal the deal. Sad times for Aussie punters if you like having more control of your betting.

The UK Gambling Commission has been accused of being utterly useless in a scathing letter printed in the Racing Post this week. 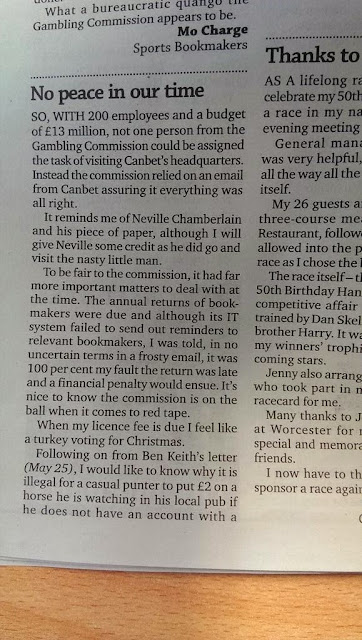 The Canbet debacle was the prime example - a UK licensed firm goes bust, continues to trade/makes promises to pay/lame excuses about technical issues preventing payment etc. and all the UKGC did was correspond by email. No visit from any of their 200-odd staff, no cease and desist order, nothing. So much for being a body empowered to protect punters and the reputation of the industry, it's obviously far more important to ensure the right brand of biscuits are in stock for their no-doubt endless number of internal meetings. And then there are the farces of Bodugi, BetButler.... All that bookies have seen from them are higher compliance costs, precious little else.

An Irish judge has slammed Boylesports and Paddy Power for their sloppiness in a case of staff theft. A Boylesports betting shop manager helped himself to almost €600k over 22 months and then blew most of it with Paddy Power online. How on earth a staff member can pilfer €600k at an average of nearly €3k a time is baffling.

An Arizona man has been told to stop being a sook and admit that he lost in a lawsuit claiming to get back the money he lost to online sportsbooks based in Costa Rica. This isn't problem gambling, this is a man not prepared to take responsibility for his own actions. Toughen up princess.

In a scene which is likely to be repeated numerous times through south-east Asia in the coming weeks, Singaporean police have been raiding illegal sports betting operations. Be very careful if betting with the black market bookies on big events, it happens every World Cup.

The National Crime Authority (UK) went on the front foot this week, putting all football nations on notice ahead of the World Cup, by putting the spotlight on the Nigeria-Scotland friendly at Craven Cottage. This ticked all the boxes as a match which could potentially be corrupted - one team experimenting before the World Cup, many players unlikely to give 100% in case they got injured, a manager who could test various formations, a side with a history of suspicious matches and a FA which has long been acknowledged as corrupt. Opposing them were a side with nothing to play for bar planning for the future. As I told Sky Sports News in an interview, you wouldn't be surprised if this match was 0-0 or had five goals in it, but once it was leaked to the press, there was no chance anything was going to be fixed, despite the slow-mo Vine clip going around of a keeper losing control of the ball in a challenge and seemingly throwing into his own net. You try holding onto a ball when someone's head smacks you on the elbow. The 'goal' was disallowed anyway.