It's rare to have a Sunday feature race meeting in Australia, but on Grand Final weekend in Melbourne, it's a wise move. The sharp blokes at Premium Punting, @premiumpunting, have chipped in with a brief preview of today's big race, the Bendigo Bank East Malvern Sir Rupert Clarke Charity Cup. It's a long name but as of this year, it's a huge charity day with many good causes set to benefit from it. 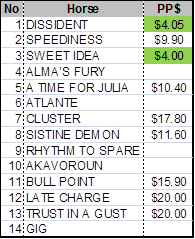 As our map shows there is good, genuine speed expected here with both Sweet Idea & Sistine Demon wanting to lead. Of these I expect Sistine Demon to be the likely one to cross and lead outright. The others should be able to lob into their positions besides outsider Alma’s Fury, who if he goes forward will be trapped wide facing the breeze. Dissident looks the get a great map finding the 1x1 box seat with cover.

Key Historical Factors:
There are four interesting historical factors been identified in this race:
- 16/30 started from double digit gate, with 10/16 of those being from barrier 14 or wider.
- 1/13 (Toorak Toff) have carried more than 55.5kg.
- 2/13 have won on minimum weight
- 5/7 have come off top five placing in Bobbie Lewis Handicap at Flemington.

Points 2 and 3 both almost eliminate themselves with this weights scale, with only three horses (Speediness, Sweet Idea & Alma’s Fury) not qualifying for one of the factors.

PrePost Market:
As always, our markets are set to 100% with every runner rated >$20 eliminated. Premium Racing Services clients get a market <100% to gain a wagering edge and to help find the stronger overlays to be wagered upon.

Dissident
Two runs to date have been excellent including a tough win in G1 Makybe Diva last run. Win prior here over same distance in Memsie was simply outstanding. Back to 1400m third-up interesting as top weight. Although the weights scale suggests that he could be unfairly weighted on our figures he is actually entitled to carry 1.5-2kg more. Third-up last campaign was when he won his first G1 and with the excellent map all he is required is to produce a similar rating to last starts win against a superior field to be difficult to catch again and make it 3/3 this preparation. Excellent overlay for a proven performer.

Sweet Idea
Two performances so far rated very similarly. Was brave in both efforts and did well 2nd up to fight off challengers behind the impressive Dissident. Freshened, has the capability of springboarding third up like she did last campaign when winning Group 2 at Randwick. Will want to lead again but it isn’t a major disadvantage if she gets crossed. Has been in the quinella in 12/15 races and with her dropping 3kg from WFA in last two runs she will be difficult to run down also. Can also be backed.

Recommended Bets: Back both DISSIDENT & SWEET IDEA. Expect both to firm late in betting.