Eponymous race of the day is the AAMI Victoria Derby. Every year we have the debate about whether a Derby so early in the season should be shortened. Nothing's changed over the past few decades, we're still not breeding great stayers, but perhaps, just perhaps, the penny is finally dropping with local breeders and the strength of the Derby might start improving as the likes of Americain, Fiorente and others start adding to the breeding mix.

Back to this year's race and it revolves around one horse. Let's ask the shrewd gents at Premium Punting which side of him they want to be...

This map provided is pre-settling, so you can see what each runner faces to get to their desired position and how much early energy will be exerted in doing so. It also shows the problems faced by some runners if they choose to run to their previous historical pattern.

As most Derbies are, expect it to be genuinely run. The query is whether connections of The Mighty Jrod intend on attempting to cross and lead with only a 200m run to the first tight turn out of the home straight. He will cross Gouldian & Lotion who will push on and be in the first few. Connections of Moonovermanhattan also have a decision to make as he could be trapped three wide around the first turn with favourite Hampton Court likely going to make it difficult for him to cross him.

The likes of Royal Standing & Magicool will likely have to concede settling further back than desired. 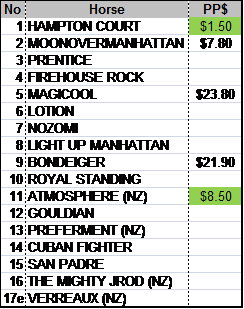 As always, our markets are set to 100% with every runner rated >$21 eliminated. Premium Racing Services clients get a market <100% to gain a wagering edge and to help find the stronger overlays to be wagered upon.

It’s all about Hampton Court

Very talented colt who raced clear in the G1 Spring Champion to win very well. Beat home the very talented First Seal and also Sweynesse who ran well in the Cox Plate last week. Extremely good time rating on the race being rated 12L above the benchmark, with the first 400m time being one of the fastest ever recorded on our database. Stable has stated will go back to his usual racing pattern of settling near the speed which will be advantageous as he will keep danger Moonovermanhattan caught deep around the tight first turn.

The critical variable factored into this horses short prices quote on our market is that at set weights he is not only 12 Official Handicapper Points (OHR) to the second runner, but a massive 31 OHR to No.3 Prentice whose rating is off inferior races in Perth.

We advised Premium Racing Services clients on Monday to back the colt at $3.00 on Monday and we do expect him to continue to be backed, particularly late when all the heavy money is laid down.

Be more than happy to accept the current prices on offer.