The Flemington Spring Carnival concludes with Stakes Day, a reference to the Emirates Stakes, which has been known by many names over the years. Recently it has been beefed up with a second Group 1 which has turned into the sprint championship of the spring. This year, it's captured the international bug with star Irish sprinter Slade Power and we have a star-studded field. Once again, we turn to the expertise of the blokes at Premium Punting....

It must be noted that it has been preferable to be close to the ‘middle to outside’ section of the straight in the sprint races thus far this week.
Expecting to have at least five runners in the first line with Buffering & Lankan Rupee to be half a length ahead of Slade Power, Temple Of Boom & Driefontein. Favourite Chautauqua will likely be in a similar spot to where he was last start, around off-midfield to the inside of the field. His jockey will be hoping the field pushes as far to the outside rail as possible. 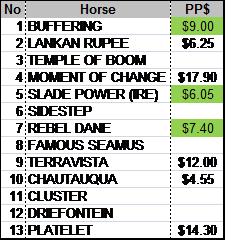 As always, our markets are set to 100% with every runner rated >$21 eliminated. Premium Racing Services clients get a market <100% to gain a wagering edge and to help find the stronger overlays to be wagered upon.

Moment Of Change & Platelet are also overlays but will not be wagering upon.

Chautauqua
Very good talent as proven last start racing clear in high rating G2 on the inside part of the track which isn’t seen often. Is clearly a horse on the up where his “roof” is unable to be identified yet. As stated earlier we have him settling in a similar position to last start and needing to pick up and sprint again on the inside of the field. A little query is that he is drawn next to Slade Power, who if he isn’t granted acceptance to be loaded last into the barriers could ‘lose it’ in there putting him off.
Although he is our top rated runner, it is extremely difficult to have him run such a higher predicted figure to these elite G1 sprinters in a quantitative model and therefore is difficult to have him assessed anywhere near the current price offered.

Buffering
Can be amusing at times when punters only factor in a horses last start performance into their opinions. It was only two starts back that he beat plenty of these in the G1 Moir! Was also checked early in Manikato and was very brave to sustain his speed to the line in the blanket finish. Is a very capable galloper down the straight including his current PB rating which was when he won this race last year. Will be the equal leader and as always be difficult to run down. Excellent value at the double figure odds.

Slade Power
First start in AUS for the European sprint champion. Very interesting runner as his collateral figures in his last three starts are enormous including his last two G1 wins in the UK which were down the Ascot & Newmarket straights. Showed real strength last start in drawing clear late in the July Cup. It will be interesting to see if they allow him to go into the barriers last as it will be of great benefit to him looking at his antics in his Flemington jumpout. His ratings cannot be ignored and he is worthy of having a ticket on.

Rebel Dane
Very good when unlucky again in Manikato, should've won? Produced a similar run in the Moir also finding little luck along the inside before surging late. Third up generally goes well at 1350-1400m but sticks to 1200m here which is wise by the stable as he generally looks to find a flat spot at the 100m in those races. Is capable of springboarding third up off two similar rated performances. Jockey Williams will sit around midfield and wait for the gap to open as the field fans out and is capable of being right in the finish at a big price.