The start of the year means most of the sporting highlights are in the southern hemisphere, particularly if you're into cricket or tennis. The Australian Open is just a few weeks away and the circuit will wind its way down to Melbourne over the next few weeks.

The best number cruncher in tennis is Dan Weston and he has shared his previews of the opening week tournaments with the blog. For length reasons, I'll just post the Brisbane events, click through to his site for the full set.

The 2015 season is just around the corner, with qualifiers for WTA Brisbane already taking place. Main draw matches commence on Sunday 4th January.

As part of my commitment to provide quality Tennis betting and trading content, I'm planning on producing weekly tournament previews to help bettors and traders get valuable insight prior to each week's action.

Whilst the draws have yet to be announced, we are in a position to make a detailed assessment of some of the main contenders for each tournament and look at court speed and its influence, and historical in-play data.

As always, detailed daily data will be available via the daily trading spreadsheets, which can be purchased via the links on the right.

Week One Trading Overview (only matches where point by point data is available):- 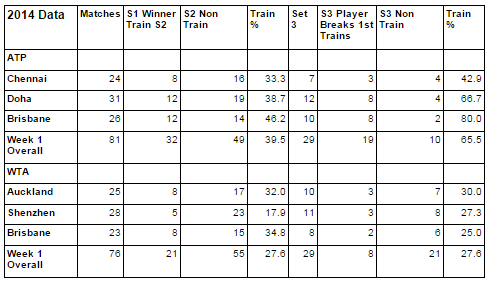 The table above illustrates the percentage of situations that 'trained' in these events in 2014.

I've had some questions about trains on Twitter so I'll clarify this a little better - a train would be a situation where there is no upward price swing from a given position. Therefore in these instances, a set one winner train in set two would indicate that they took a set and break lead in set two and retained this lead without being broken back. A non-train would include the player that lost the first set breaking first in set two, or recovering a set and break deficit, or even recovering one break when a set and double break down.

Likewise, a set three train in this instance would be a player that has broken first and retains this lead throughout the deciding set.

As can be seen from the data, both in the ATP and WTA, Brisbane had the highest percentage of set two trains in 2014 from the week one events. This also held true in set three in the ATP. Court speed - as seen below - is very fast in Brisbane and this is a likely reason for the high proportion of trains. With liquidity likely to be worse in Brisbane than some of the other ATP events due to the unsociable hours that the tournament is played in for European traders, traders that like laying at low prices may wish to focus on events in Chennai and Doha.

Player motivation and fitness is likely to be high this week. It's like a new term at school, everyone will be enthusiastic and want to start the new season and new year with a good performance. Having said this, the overall ATP train percentage is very high compared to the mean and whilst researching the data, it was clear that there were a number of dominant final sets in the ATP, in particular. The WTA data shows that most matches in 2014 were very competitive and assuming this holds true, the WTA should provide some excellent trading conditions in week one of the season.

Conditions are likely to be very fast with fewer service breaks than average. 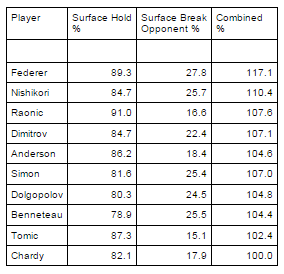 It can be seen that Roger Federer, as the top-ranked player in the field, is by some distance the best player in the event, and will start as a deserved tournament favourite. The Swiss legend, however, was beaten by Lleyton Hewitt in last year's final and the Australian veteran is also playing again this year. However, 2014 saw a further decline for Hewitt, particularly on serve, and as mentioned in the declining players article, Hewitt should be opposed in an almost mandatory fashion when a set up and a set and break up. All ten players above have hard court service hold percentages above the mean, with a real mixture of return percentages. Looking at these players, it's likely that if these players make the latter stages, the event will be more serve-dominated than return.

Having said this, the likes of Jurgen Melzer, Mikhail Kukushkin, Carlos Berlocq and Andrey Golubev also make up the numbers and these players tend to be weak servers on the surface and make for poor front-runners in matches.

Conditions are likely to be very fast with fewer service breaks than average. 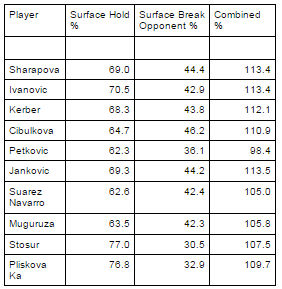 Just looking at the names on the list it's clear this is a high quality event. With Sabine Lisicki, Elina Svitolina, Madison Keys and Victoria Azarenka - who is making her way back from an injury ravaged 2014 - also competing, this promises to be a very open and competitive tournament.

Maria Sharapova is the top-ranked player but as can be seen from the hold/break percentages, she isn't dominant over the field on this surface. Of the table, Dominika Cibulkova, Andrea Petkovic and Sam Stosur arguably have the most to prove. Cibulkova will be looking for a strong start to 2015 with runner-up points to defend at the Australian Open, and she was woeful in the tail end of 2014. Petkovic, as mentioned many times in historical match previews, does not play her best on hard courts and the statistics above illustrate that well. Both may see their serve perform inconsistently, and I'd expect them to be broken with relative regularity. Stosur is a stronger server (but a weak returner) and had a poor 2014. She also tends to perform very poorly in her home country, perhaps unable to cope with pressure and expectation.

Of those not in the table, Lisicki and Keys tend to be stronger on serve than return, whilst Svitolina is a decent all-rounder. Former world number one Azarenka is a much better returner than server and depending on the draw, it might pay to oppose the Belarussian on serve initially here as it will be likely that she will be wanting for consistency after missing the tail end of 2014.

Read the full schedule of Week 1 previews on Dan's site