Melbourne's autumn carnival winds down as the attention moves north of the Murray, but Moonee Valley still has a couple of feature races under the Friday night lights before the clocks go back.

This week it's the Alister Clark Stakes for 3yos, a race which launched the career of the mighty Vo Rogue all those years ago... Sharing their shrewd analysis is the team from Premium Racing Services

Expecting that, having drawn the closest barrier to the rail that No.5 MASTER RESET crosses and leads the field with No.13 MAASTRICHT and No.10 GENERAL JAMES coming across and sitting behind him. The speed outside that trio is reduced, likely enabling this trio to slow the tempo down mid race.

By this time of the night, it will be established whether or not there is a noticeable bias, so play close attention to that as it is a challenge to predict what (if any) bias will occur prior to the meeting starting. 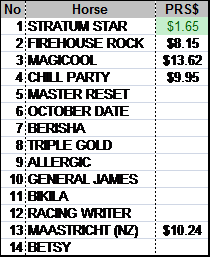 Stratum Star is brilliantly weighted in this event, given the Set Weight conditions of the contest. He has a 16 point Official Handicapper Rating advantage on the second highest rated horse, Magicool. This places him with an immediate head start, all else being equal.

He has been excellent this campaign, rising gradually in distance and grade – first up 1300m Open Grade, second up 1400m G3 then last start in the G1 Australian Guineas over 1600m. 4th up this distance is a smart decision by trainer D.K.Weir, one that should ensure the horse peaks. He has, vitally, improved his performance rating at each of these starts, with a PB last start finishing within 0.6L of Wandjina (arguably the best 3YO miler in the country). His rider, Brad Rawiller should have an easy time parking the horse on the back of the speed, ready to join in at the turn to put pay to them.

Presumably, the market has decided to partially risk his chances with the rise to 2040m, yet he has given no indication that it is beyond his reach as the longer the distance he competes in, the higher his performance rating has proven to be.

The current public offering of >$2.00 is good value.