ANZAC Day for racing in Australia have never traditionally been a strong day, perched in between the autumn and winter carnivals, but one race which always takes place on this day is the VRC St Leger. Investment into staying races by Racing Victoria might eventually have the desired effect of raising the level of this race.

With the preview, it's the guys from Premium Racing Services, @PremiumRacingS. You can check out their services on their website.

Pace rating we have on this is well above par for a staying trip like this. Both Authoritarian & Zatopaz led at very slow tempos last start (both producing slow time ratings) so it will be only a matter of who show their intention desperately early to lead outright. They will not fight each other hard at all as both jockeys know it would be extremely detrimental to their chances of running out the trip.

As our map highlights the three outside gates look the most disadvantaged runners as they will find it difficult to not be caught wide if they intend on attempting to settle in their desired positions. Colour Of Money gets an excellent run just off the speed two wide with cover without exerting any early energy. 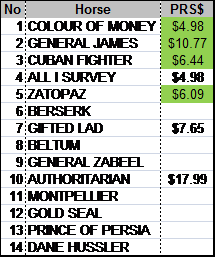 As you can see, our raw market is extremely open but does have some overlays present on the early corporate markets.

Colour Of Money - Ride queried last time at Gosford when just off a crawling tempo, was expected by analysts to go towards the rear but was clear jockey McEvoy just identified that there would be a lack of speed in the race (which was correct); just should’ve advised stewards. Good map here just parking off the pace again. Has plenty of fitness on his side which will be beneficial over this trip and like Dunn now riding. Can produce some improvement and threaten.

General James - Disappointing here last start when a significant drifter in betting and lost by 9L. Efforts prior rated superior. Has two major queries into this being that the map looks a problem early and whether he will stay the trip. If drifts late in the betting we will ignore him.

Cuban Fighter - Too strong for them on Sunday, raced clear in maiden on heavy surface. On back up off that large PB coming onto drier surface interesting, certainly looked outclassed in three earlier runs in campaign but this gelding is an out and out stayer. Positive rider change with Craig Williams on does help. Likely to be our most significant overlay present.

Zatopaz - Led at crawling speed and was able to kick clear and win in style at Gosford, was well backed late that day. Will have to work much harder if wants to lead but am confident if Hall digs up early and shows his intentions he will be able to cross and then switch off. Hard to see him holding that rating here but in this race he isn’t required to. Tough to run down.

Recommended Bets: We will be advising clients to use our wagering software to back the overlays present. If No.2 drifts significantly late in betting then would be happy to ignore that overlay.