It's the grand finale of the Australian version of the world game, and we Aussies don't believe in a season which peters out to a final round of fixtures, there must be a climactic finish. So it's the A-League Grand Final!

Trusted with the preview are the data crunchers at Football Form Labs, @footballformlab, the fantastic football database which should be the backbone of all your football punting. Try them out now via FootballFormLabs.com, and trust me, there is a hell of lot more football going on than just the winter leagues now concluding.

The 10th edition of the A-League Grand Final sees Melbourne Victory take on Sydney FC at AAMI Park in a repeat of the 2010 Grand Final which ended in a victory on penalties for Sydney, who had won the regular season that year. This time it’s Melbourne that triumphed in the regular season by three points from Sydney in second, but unlike in 2010 the Grand Final will take place at the home of regular season champions this year. Both sides recorded impressive results in their semi-finals, with Victory winning the Melbourne derby 3-0 and Sydney also recording a comfortable 4-1 victory over Adelaide United. 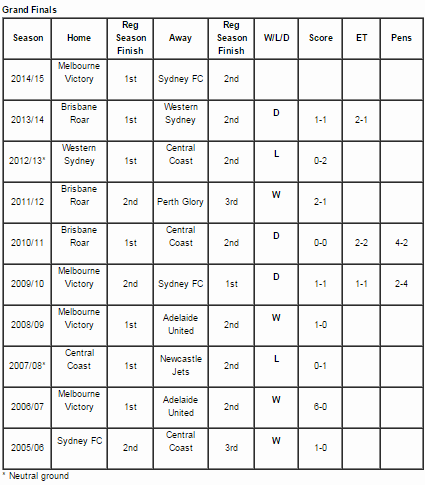 The venue of the Grand Final has been incredibly important since the inception of the A-League, as the two defeats listed above occurred in 2008 when the final was played at a neutral ground and in 2013 where though the final was played in Sydney, it wasn’t at the Parramatta Stadium, Western Sydney’s usual home. In each of the other seven Grand Finals, the team that finished higher in the regular season won the final, with one of the sides needing extra-time to exercise their superiority and two needing penalties. Six of the sides that finished higher in the regular season played the Grand Final at their home ground (the exception being Sydney FC in 2010 who despite winning the regular season played away as a result of a semi-final defeat in the Finals series) and that will be the case on Sunday morning for Melbourne Victory, who split their games between AAMI Park and Etihad Stadium.

It’s also worth noting that the four home sides that won the Grand Final in 90 minutes recorded victories over their final opponents in the regular season, either at home or away. Interestingly each of the three meetings between Melbourne and Sydney in the regular season this term ended in a draw, with two of these games being played at Sydney. Though their encounters in regular season were enthralling affairs, with two ending 3-3, they don’t tell us a great deal other than that these sides were evenly matched, and so we next looked at the historic PPG of the Grand-Finalists in the regular season. 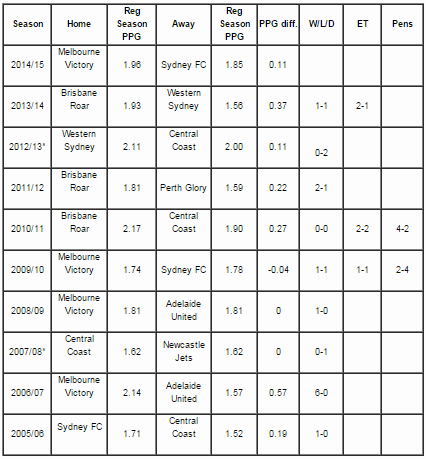 Both Melbourne Victory and Sydney were fairly evenly matched during the regular season, unlike in the 2007 Grand Final where Victory were much the superior side over the course of the season and proved that on the night of the final, decimating Adelaide on that occasion. While only three other sides have had a higher regular season PPG than Victory going into the Grand Final, it is important to note that Sydney are the only side that Melbourne have failed to beat thus fair this campaign and it also important to consider that Sydney are unbeaten on the road this season and have won their last eight away games, scoring a remarkable 25 goals. Sydney’s captain Alex Brosque scored two goals in their semi-final victory over Adelaide. He has now scored six goals in their last four games and his strike partner Bernie Ibini-Isei has netted in each of Sydney’s last four.

Neither side has any new injury concerns coming into this game. Melbourne are still without their regular keeper Nathan Coe while Sydney will again have to make do without defender Ognenovski and midfielder Abbas. Despite Sydney’s impressive form, particularly on the road, we expect Melbourne, with historical stats on their side, to reinforce the fact that they are the best side in Australia following their regular season victory, and are backing them at 1.67 to lift the trophy. The reason we are backing them for the trophy rather than to win the game in 90 minutes is because Sydney were unbeaten on the road this term and Victory might need extra-time or even penalties to overcome them. With this in mind, it’s worth dutching Melbourne to win in extra-time at 9.0 and on penalties at 11.0.