Bit quiet on the blog of late, so how about a preview of North and Central America's big football tournament this summer, the CONCACAF Gold Cup. It started yesterday but it's not too late to get involved.

Football Form Labs are the experts in football data and customised queries, covering a wide range of leagues around the world, including 17 summer leagues. To sign up for their great software by clicking here.

With the Copa America, Women’s World Cup, and U21 European Championships all reaching their conclusion this week, international football fans don’t have long to wait for the next instalment of summer competition as the CONCACAF Gold Cup begins on Tuesday 7th July. The tournament will be hosted in the USA, as has been the custom since the competition began in 1991, with two matches also being held in Canada for the first time. The winners of the tournament will qualify for a play-off match against the USA, the 2013 champions, for the right to represent the CONCACAF region at the 2017 Confederations Cup, with that match taking place later this year, unless of course the USA win this tournament and therefore qualify automatically.

There are 12 teams competing for that opportunity, as well as to lift the trophy itself, in a format identical to the Copa America with three groups of four, meaning only four sides will be knocked out at the group stages. Also like the Copa America, we have Mexico and Jamaica competing and those teams as well as the other 10 sides in this edition of the tournament are listed below along with their Form Labs grading. The Football Form Labs Grading system is based around an Elo rating system and helped us pick out the two finalists at the 2014 World Cup as well as the champions at the 2012 European Championships, and hopefully Argentina in this year’s Copa America! 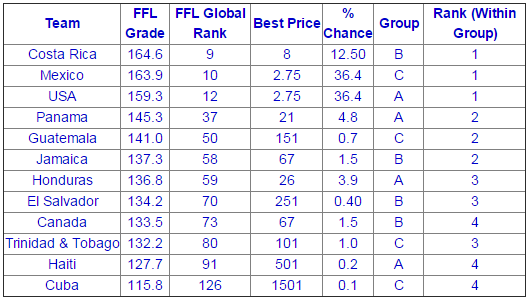 Having listed the teams according to our gradings, we’ve also included the best price for each side to win the tournament and there looks to be some value that stands out as a result of this. Whilst Costa Rica, Mexico, and USA look to be a class apart in this tournament, our grading system in fact has Costa Rica top of the pile, meaning that a price of 8.0 is worth looking into. After defying expectations at last summer’s World Cup by winning a group they were widely expected to come last in as it consisted of Uruguay, Italy, and England, Costa Rica were knocked out on penalties by the Netherlands and since then have only lost three of their 11 matches. Admittedly those defeats have come in their last four matches, but two of the games were away against Colombia and Spain and none of the defeats were by more than one goal. In a friendly ahead of this tournament against the co-favourites Mexico, Costa Rica led 2-0 at half-time against a Mexico side that had Vela, dos Santos, Javier Hernandez in their ranks, before they let Mexico back into the second half to level things up at 2-2, largely due to the fact that Paolo Wanchope made six second-half substitutions.

Part of the reason for both Mexico and USA’s short price is the fact that they’ve won 11 of the 12 editions of the Gold Cup, with Canada the only side to break their dominance in 2000. Indeed, Mexico and the USA have contested three of the last four finals, as shown in the table below. We’ve also included the gradings of the 24 Gold Cup finalists in brackets and with the exception of USA in the first instalment of the competition and shock winners Canada in 2000, it seems that a grading of at least 155 is required to win the title. This again suggests that anyone other than Costa Rica, Mexico, or USA winning would be a real surprise, though Panama making the final in 2013 suggests that there is hope for the outsiders. 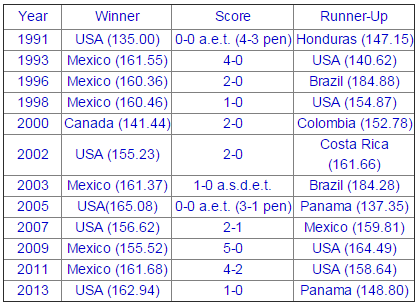 Next, we decided to look at the form that the Gold Cup winners this century showed going into the tournament by listing their PPG in games they played between Gold Cups. The last eight winners all had a PPG of at least 1.50 going into the tournaments they won and as the table showing the form of this year’s Gold Cup competitors highlights, the front three in the market again stand out (Trinidad & Tobago are the exceptions but most of their wins came in the Caribbean Cup against lesser opposition and they have lost against Panama, Curacao, and Jordan in their three fixtures ahead of this tournament). 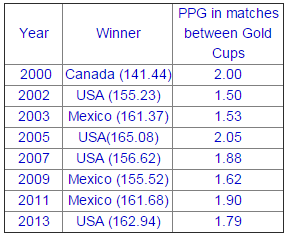 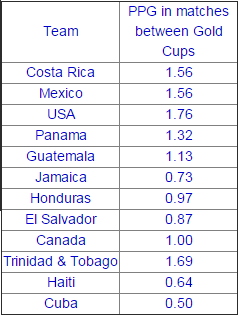 Since everything points to the top-three in the market it makes sense to look at the draw and the first point these sides are likely to meet each other. If all three win their groups, as expected, and make it as far as the semis then it’ll be Costa Rica and the USA that meet in the top half of the draw, whilst Mexico shouldn’t meet either of them before the final. With that in mind and also considering that Group C looks the easiest according to our gradings, Mexico look like having a very good chance of at least making the final. However, they were rocked by the news that their talisman and leading striker Javier Hernandez broke his collarbone during the recent friendly with Honduras and will miss this tournament. Whilst Chicharito has struggled at club level, he’s been prolific for his national side, netting 39 times in 72 appearances. However, it is worth noting that Oribe Peralta started up front alongside Gio dos Santos in Mexico's World Cup Last 16 exit with Chicarito on the bench. With Carlos Vela also back in the international fold and this side packed with an abundance of talent, unlike their Copa team, they should improve throughout the tournament and their draw means it will be a surprise if they don't make the final. Their failings in the Copa also shouldn't be a negative as in 2011 they were even worse in the South American tournament before dominating the Gold Cup.

While it will undoubtedly take a massive effort to overcome Mexico and the USA’s duopoly on the Gold Cup, we can’t help but feel that with Clint Dempsey ageing and no longer in the Premier League and Landon Donovan no longer around, this USA side is weaker than the one that lifted the trophy in 2013. Furthermore, four of the side that started in their exit to Belgium in last summer's World Cup, Matt Besler, Jermaine Jones, Geoff Cameron and Tim Howard are also missing from this squad. This is highlighted by the slight dip in their grading and it could be time for a first-time winner of this year’s Gold Cup. We’re hoping that Costa Rica can be the ones that do it, building upon their impressive World Cup display that saw them get further than anyone else in this tournament, though the loss of keeper Keylor Navas to injury could be a significant blow. While there isn't a finalists market at the time of writing a Costa Rica/Mexico selection should be decent value and you can actually get a combined 'dutched' price of 2.05 if you choose to back both teams for the title.

Recommendation: Costa Rica to win the CONCACAF Gold Cup at 8.0, Sky Bet (may be slightly out of date)

Start doing your research for next season now by signing up for industry-leading software by clicking here.