Been a bit lacking on the personal content of late, so I thought I'd try something different - reviewing all the podcasts I listen to regularly. 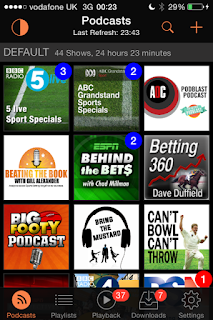 No Such Thing As A Fish - if you enjoy QI, you'll love this. By the 'QI elves', a weekly podcast which delivers just four facts per episode, but then goes off on many tangents. Unlike everything else I listen to, the content is never dated, so you can go back to the start of the archive and catch up on 60+ episodes if it floats your boat.

Wait Wait, Don't Tell Me (NPR) - an American comedy show delivered in front of a live audience. A mixture of celebrity guests and phone-in listeners (well vetted) being quizzed on the news of the week. Think Have I Got News For You (TV) and The Now Show (Radio4/podcast) from an American angle.

Radio4 Comedy of the Week - some gems, some duds in here. Personal tastes...

Rhod Gilbert's Best Bits - edited version of his Radio Wales weekend radio show. If you like his TV work, you'll enjoy this.

Newsjack - Topical Sketch Show - another Radio4 comedy show based on the news of the week (I never listen to R4 by the way, just some of their podcasts). 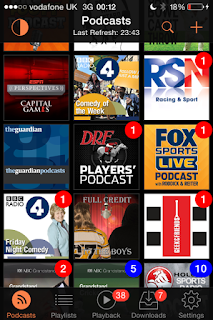 RSN (Aussie racing, focused on Victoria)
- Correct Weight - Sunday wrap-up on Saturday's racing from around Australia.
- Racing Ahead - daily (weekdays) coverage of issues affecting Australian racing codes, regularly questioning integrity and the status quo. Interviews with jockeys and trainers who understand that sharing information is good for the industry rather than hiding between a wall of secrecy. There is nothing like this in the UK.
- Winners - two shows under this banner, the Monday Marker examining sectional times and ratings from the weekend racing, and trials analysis; Gait Speed, a weekly harness racing programme, perhaps a bit ra-ra, presented by people who work for the local governing body for the sport.
Racing Postcast - as you can probably guess, a show from the Racing Post team, previewing and then reviewing the weekend racing in Britain and Ireland.

The Final Furlong - seasonal podcast which generally focuses on Cheltenham and the long buildup to it, but occasionally they pull their finger out for the Flat as well, at least for Royal Ascot. Excellent panel - Emmet Kennedy, Kevin Blake, Noel Hayes, Vanessa Ryle and guests, now sponsored by At The Races.

OneFortySevenSeven - Australian harness racing podcast, more freedom to be critical than Gait Speed, and much more relaxed too. The name comes from the record mile rate set earlier this year by superstar mare Adore Me. If they could just stop laughing at their own jokes....

DRF Players' Podcast - weekly US racing podcast featuring the big races of the coming weekend. Have just subscribed to this one, no comment on how good it is.

I used to listen to all the Timeform Radio ones regularly, but alas, that radio station and podcast is no more. 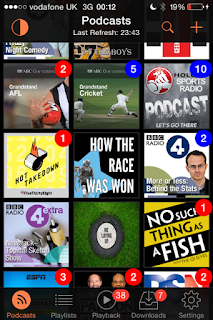 Geek & Friends - Peter Miller and Dave Tickner rip the shit out of English cricket and the media on a regular basis, and regularly push the cause of cricket in the developing nations.

Can't Bowl Can't Throw - great work from @dennisdoescricket_ and @cricketbatcat with regular guests of the highest calibre and not just Aussie-focused.

- all entertaining, especially when ripping into England or the ICC. Top two are English, bottom two are Australian.

The BigFooty Podcast - stems from the popular AFL forum, a well-balanced discussion without the hysteria of forum trolls and fanboy media types with an axe to grind.

The Superfooty Podcast - Anthony Hudson and some Herald Sun journos look back at the weekend round.

The Traders NAB AFL Fantasy Podcast - if you play fantasy AFL, this is worth listening to. 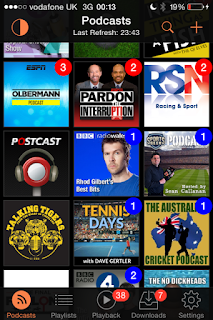 The Tennis Podcast - a bit on the posh side, deliberately avoiding anything to do with betting (including understanding maths - 'Serena must be odds-on to win the calendar Slam now ' - Wimbledon odds at the time 2/1), but otherwise pretty good. Prefer this to the various American ones which tend to ramble or get too matey.

Velocast - the free part of their regular coverage, across the whole year not just Tour de France time.

Cycling Podcast - from the Daily Telegraph, very informative especially during the Tour. Just like the Velocast podcast, there is more content available for a small subscription fee.

No Laying Up - entertaining American podcast, prefer it to ByTheMinGolf which I gave up on after a while.

William Hill Golf Podcast - tournament previews each week, only problem is I'm rarely up to date enough to listen to it in time! 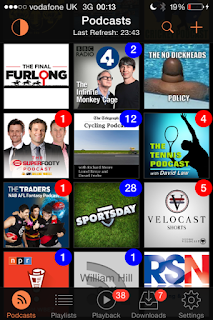 Fox Sports Live with Roddick & Reiter - Really enjoy this one. Spread wider than just US sports, Roddick is great behind a microphone, as you might have heard during Wimbledon.

BBC 5 Live Sport Specials - from the regular Friday Sports Panel to previews of major events to looking back at great events of the past. Wide range of sport covered in these, soem are brilliant, others not to my taste and are skipped over.

Bring The Mustard - cricket plus other sports, put together by some NSW cricketers - Trent Copeland, Ben Rohrer, and Josh Lalor.

Sportsday SA and WA/Off the Bench/The Locker Room - all put together by CrocMedia and syndicated across Australia. I'd prefer a Victorian one but can't stand the 'voices for print' of Liam Pickering and Terry Wallace. The northern state ones focus on the rugby codes, no interest, so it's look to the west. SA ones naturally overly focused on the Crows and Power, WA version thinks the Dockers and Eagles' shit doesn't shit but plenty of content worth listening to. Scott Cummings is the clown prince in the WA editions, while esteemed football journo Michaelangelo Rucci is the main man on the SA podcasts.

Full Credit To The Boys - a couple of NSW guys rambling on about sport, bit too much NRL for my liking but generally entertaining.

Keith Olbermann - ESPN podcast which I assume is about to end as Olbermann's contract runs out at the end of July. Big shame, the world needs more journalists prepared to stand up for principles and not just worship the icons and controllers of sport. Audio version of the TV show.

Pardon The Interruption - ESPN podcast where two blokes just talk shit and pay out on the world of sport. Audio version of the TV show.

Beating The Book - Vegas look at sports odds, hosted by Gill Alexander. Some great stories on there about the good ol' days of betting from industry veterans.

Behind The Bets - an ESPN podcast hosted by Chad Millman, looks at various sporting events from an American betting angle.

Betting 360 - Australian podcast hosted by Dave Duffield. Nearly always an interview with a professional punter or someone in the sport. Some great episodes in the archive for whatever sport you enjoy. 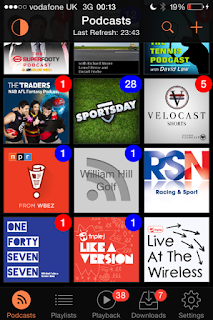 Capital Games - ESPN podcast often cover the politics of sports and sports betting in the US.

Behind The Stats - data experts ripping misleading or downright false numbers quoted in the media to shreds.

I like to think I'm still young so I subscribe to two Triple J podcasts, Like A Version and Live At The Wireless, but filter out quite a few which don't fit with my going-grey tastes.