The first Group 1 race of the new season in Victoria, it's the Memsie Stakes. A 1400m race where not that many of them are 1400m specialists, as expected as this end of the campaign.

Time to call upon the services of Premium Racing Services, to shrewdly assess the form.

The emergencies do play a significant part in the map, in particular Charmed Harmony who would want to cross and take up the lead. Other emergency Pressing is then going to have severe issues finding cover unless he goes well back.

If the expected leader does come out then it is expected that Entirely Platinum will take the lead and generate a true pace. A few backmarkers will have to settle much further back than desired as the other backmarkers drawn inside of them will dig up.

Our Market:
This market is of our system's ‘raw’ prices which is set to 100% with every runner rated >$22 eliminated. PRS clients get a market <100% on a wagering sheet which also blends in the public price of each runner to find a wagering edge.

As you can see, our raw market is open but does have some overlays present on the early corporate markets. 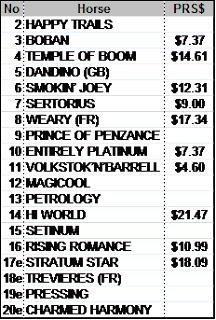 VOLKSTOK’N’BARRELL - First up. Produced two good runs in Sydney after coming over from NZ. Both were slower than par, in particular the 3rd in the Derby. Ruakaka trial solid recently alongside the best NZ horses. Is certainly accomplished at the trip winning 2/2 and also winning at 1300m. Will stay out of the speed battle but still not be that far away, potentially three wide with cover. Like in-form Blake Shinn riding him. Is expected to shorten and is an excellent overlay on current markets.

ENTIRELY PLATINUM - First up also. Two jumpouts been sound at Flemington. First up in Feb in Orr Stakes here over same trip ran a good 2nd behind Dissident. He also won 1st up last spring when well backed. May lead if emergency Charmed Harmony is scratched. Tough horse to run down fresh over his best distance.

SERTORIUS – No doubt there are bigger targets later in the spring for him but he presents as a significant overlay fresh. 1st up also. Two runs campaign in autumn very good, a campaign widely used now for runners attempting a tilt at the cups in spring. Got a deserving win in that 2nd run. Ran well in this race last year when ridden well back off the leaders that were the quinella in the race. Has been given that figure here again coming from well back.

Recommended Bets:
At this stage, we are not 100% sure what the track rating will be for the day which will certainly alter our market on the race, but we will be advising our clients to back the overlays present.