I call it the day the Melbourne spring starts getting serious. Back to headquarters, group racing galore and some sensational horse flesh in action. Previewing the headline race of the day, the Makybe Diva Stakes, it's the team from Premium Racing Services, @PremiumRacingS.

As the speed maps shows there looks to be a lack of speed on paper with Entirely Platinum, who led the Memsie Stakes field, to likely cross and take up the running again. Then expect Magicool to go back to his on pace pattern and park second pair with Mongolian Khan.

With plenty of runners in the race likely wanting to go back and run on, it will leave the outside of those drawn runners to have to shuffle back and be further lengths away from the leader than desired.

Our Market:
This market is of our systems ‘raw’ prices which is set to 100% with every runner rated >$22 eliminated. PRS clients get a market <100% on a wagering sheet which also blends in the public price of each runner to find a wagering edge. 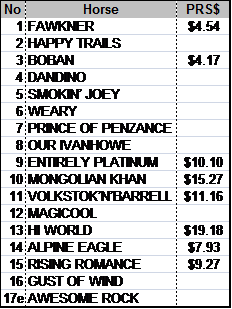 As you can see, our raw market is open and very similar to the early public markets.

FAWKNER - First up. No autumn campaign. Excellent 2014 spring, was very brave in Cox Plate before having enough in Melb Cup. Close 2nd in this race last year to Dissident which produced an elite rating. Has been given slightly inferior rating here but still one good enough to potentially win.

BOBAN - Very brave against bias 1st up to win Memsie along the rail. History is with him here with the majority of recent winners 2nd up and drawing inside barriers, should be able to settle closer here. Generally advances 2nd up. Good winning chance again and is predicted to produce an elite figure.

ENTIRELY PLATINUM – Brave in Memsie although having all favours at the front. Slow time rating on the race. Second up pattern good winning 3/5 and is likely to cross and get good run again from the front. Longer straight a bigger test to attempt to hold them off.

MONGOLIAN KHAN – First up. NZ trial ok at Ruakaka. Has won at trip but in much inferior class when lightly raced in NZ. Multiple G1 winner who won't be fully fit yet but must respect any runner who has won 7/9. Unsure is worthy of having a win ticket on.

VOLKSTOK’N’BARRELL– Went soundly to line in Memsie, only 1.9L off winner. Won both 2nd up runs to date in NZ, advancing significantly on fresh efforts. 2/2 at mile also and loses nothing with Craig Williams now riding. Expected to advance.

HI WORLD – First up effort solid although being well backed in Memsie. Map an issue, hard to see him finding cover unless goes well back. Is a difficult runner to give advancement here and is a likely drifter late in betting.

ALPINE EAGLE – Raced with head in uncommon position but still closed very hard to line first up in Adelaide. Got enormous talent but can struggle to relax in races. Won only 2nd up run by 5.3L last campaign. Has an impressive sprint on him, hopefully can get early and middle part of race right. < br>
RISING ROMANCE – First up went solidly in Memsie when midfield behind slow speed. Second up last prep 0.1L 2nd in very weak NZ G1. Inside draw not ideal but is expected to show natural advancement.

Recommended Bets:
We will likely be advising our clients to back the overlays in the race with the hope that the public markets will become less similar than our raw market closer to the jump.