The momentum is building towards the heights of spring, and the Underwood Stakes really means the good Cup horses should be well on their way in their prep.

Taking the reins with the preview are the shrewd analysts from Premium Racing Services. You can find out more about their services via their site or by following @PremiumRacingS

There is no doubt who the leader will be, with The Cleaner to dig up and take up and running and take them at a settling speed well above benchmark. First up here he went too slowly in early stages which may have cost him the win, doubt jockey Callow will be making that mistake again. Expect Mongolian Khan & Mourinho to be the chasing pair. Unsure what Hi World & Dibayani will do early, will be interesting to see in particular with Hi World if they choose to cross the other two on pace runners inside of him and be the lone chaser in the second line which is potentially dangerous.

Our Market:
This market is of our systems ‘raw’ prices which is set to 100% with every runner rated >$21 eliminated. PRS clients get a market <100% on a wagering sheet which also blends in the public price of each runner to find a wagering edge. 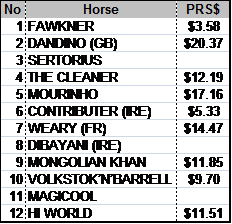 As you can see, our raw market is reasonably similar to the early public markets.

VOLKSTOK’N’BARRELL – Ignoring that he rated down second up after being unlucky in the Makybe. Doubt they expected to be leading early and then once third the rail he got knocked down after straightening. Is undefeated third up over in NZ, both at a shorter trip than this. Two runs this campaign are the only two runs in career he hasn’t placed. Will be much fitter like a lot of these into this and expect he will find his desired position just off the speed which is the settling position he ran well in the two Sydney Derbies in autumn.

HI WORLD – Two performance ratings this campaign been identical. Led the Makybe field at a slow speed form the 1000m and was quickly headed. Is capable of springboarding 3rd up, the run he won his low rating G3 in autumn. The map the query, not entirely sure what they will do. Do have advancing.

Recommended Bets:
At this stage the public market is a bit too similar for us to wager in the race, but am hopeful late in betting that some of the markets which will have a tighter book percentage will provide some more overlays, in particular Fawkner, to back.