Spring is in the air and we're right into the heart of the spring racing carnival. While it's not the race most of the internationals set themselves for, four foreign runners (Taufan's Melody, All The Good, Dunaden and Admire Rakti) have been successful in the past 20 years, and three winners in the last seven.

For the pace and overlays preview, it's over to the shrewd analysts from Premium Racing Services, @PremiumRacingS

If I get the opportunity, I'll do a more detailed runner-by-runner version.

It looks a fantastic edition of the cup with nine horses present (including scratchings) already producing a performance rating >1L above the historical benchmark figure required to win this race. This is a rare occurrence as the runner that usually wins this race produces a PB rating on the day.

Note: this map does include the emergencies in it, so the map will look different come race day.

Although historically this race is run above par speed, considering the large field there isn’t as much speed as previous editions with the longshot Magicool the likely leader if/when the emergency Complacent comes out.

With the 317m run to the first turn there are a few decisions to make for some of the jockeys, in particular Glen Boss on Royal Descent who I expect will take its chances and attempt to quickly cross and park in the first four upon settling.

Fitness and conditioning will also play a key role into some of the runners’ tactics, with the majority of these runners targeting the Melbourne Cup. This is important in particular for the internationals, with some of them likely to be ridden more negatively than their historical patterns abroad.

This market is of our system's ‘raw’ prices which is set to 100% with every runner rated >$21 eliminated. PRS clients get a market <100% on a wagering sheet which also blends in the public price of each runner to find a wagering edge. The emergencies have been excluded. 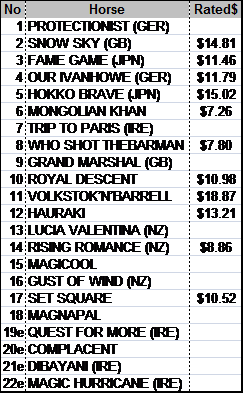 Significant overlays:
OUR IVANHOWE – Had every chance but was bold with 60kg in Bart Cummings. Got the run finally once in the straight and did go well to the post. Already having run at 2520m into this not an ideal pattern historically but he has done a similar thing when running 2400m second up in the Arc and then winning a G1 third up at this trip in Munich. Collateral figures in 2400m G1 wins in Germany superb. Should get cover around midfield and compete well.

WHO SHOT THEBARMAN – Will be our large result on the race. Ticking over solidly for this. Good last 100m in Turnbull Stakes when settling third last. Was a blanket finish like most WFA G1’s in Melb so far this spring. 4th up last prep was a good 2nd in Sydney Cup when looking home at the 200m. Was an elite rating. Fourth up last spring won Bart Cummings which was a weak race but did what he had to do. We know he can stay and is capable of producing a fast time rating which will be required here to win.

ROYAL DESCENT - Beaten again by stablemate in G1 when nailed late by Preferment in Turnbull. That now makes it eight G1 placings since 10L G1 Oaks win as a filly. Map is the major query and the main reason you are getting a premium on her price, expect they will take chances and go forward and if she can cross Set Square as soon as possible she will get there. We know she will run honestly.

RISING ROMANCE - Caught wide midfield and still stuck on evenly in Turnbull. Performances prior good including second in Makybe Diva Stakes. Fourth up 2400m historically a good pattern into this race. Will exert the least energy to find their desired on pace spot after drawing a much better gate to last start. Was second in this race last year and is capable of running well in it again.

Backing these runners collective percentage is like backing a $2.40 on our ‘raw’ market. When inputting the public prices to create our ‘final’ betting market in our PRS staking sheet it will be quite longer.

Recommended Bets:
Back the overlays which are present on our market.