Here we go with four Saturdays of sensational racing in Melbourne, kicking off with Caulfield Guineas day. It's right up there with Derby Day in terms of quality, every race is black type, and only the 2yo race is just Listed.

Premium racing needs premium analysis, so it's over to Premium Racing Services, @PremiumRacingS with the preview!

Like most editions of this great race we expect to at least have genuine speed with Dal Cielo likely to be crossing and leading. It is expected jockey Craig Williams on longshot Kentucky Flyer will allow this to occur as it will leave him in the 1-1.

The map reads very average for a few of the major chances, in particular the favourite Press Statement who is heavily reliant on Snoop & Shards tactics with regards to whether he can push forward in the first half of the field or not. My advice to connections would be to cross and get on the back of Shards and be satisfied being midfield three wide with cover, but Hugh Bowman is arguably best jockey in the country when it comes to finding great positions from sticky maps on paper.

Our Market:
This market is of our system's ‘raw’ prices which is set to 100% with every runner rated >$21 eliminated. PRS clients get a market <100% on a wagering sheet which also blends in the public price of each runner to find a wagering edge. 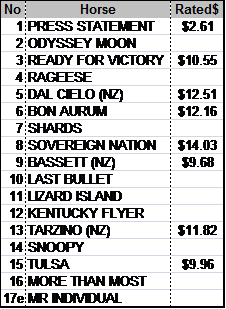 Rated runners:
No.1 PRESS STATEMENT – Dominated Stan Fox last start in small field, dashed clear in final furlong. Clear best horse in this race, has 18 Official Handicapper Rating points on next rival at set weights. Map is the query as stated above but Bowman is better than anyone to find a good spot in a position like that. If doesn’t exert too much early energy is the one to beat.

No.3 READY FOR VICTORY – Well placed to win guineas prelude but never travelled in the run. Gets the blinkers on he needs, hopefully they don’t get him to refuse to muster early. Strong SP profile this campaign without winning a frustration, is still yet to win since debut. Will appreciate a mile but needs luck being towards back on inside.

No.5 DAL CIELO (NZ) - First run in AUS for Murray Baker good in prelude when sustaining a solid speed to the post. Was a bit keen at the front, because of the good run suspect they will try to lead again. Won’t appreciate the mile when comparing to the other chances.

No.6 BON AURUM - Got the job done again last start when closing well down middle of track. Was again a surprise to punters. Doubt is capable of improving on that rating here unlike plenty of these because his last two wins have rated so much higher than previous career starts. It’s rare horses can do that for three runs in a row. Coming in off a last start win is a positive factor though.

No.8 SOVEREIGN NATION - Too good for them last Fri Night in weak G2. Spiralling performances to date including a run against some of these two runs ago when back and wide and laying in. Map is an issue along with significant class rise. If gets rails run can be in the finish.

No.9 BASSETT (NZ) - First up victory good in fast time here. Now 2/2 at track and had no luck when fav behind Press Statement in G1 JJ Atkins as a 2YO. Has the time ratings and natural improvement expected to threaten in this.

No.15 TULSA - Missed start and just missed again last start after peeling to the middle of the track, another eye catching run after he was unlucky and strong late two starts back. Draws gate 16 three times in a row, very unlucky. More than anyone will like the mile but just needs some luck peeling out wide from well back.

Recommended Bets:
Back the overlays which are present late in betting, these may change as the favourite is a good possibility of drifting.