Derby Day! It's here! Well, in a a day and a half anyway. The greatest raceday in the southern hemisphere, with black type racing from start to finish. and to preview the eponymous race, it's over to the experts at Premium Racing Services, @PremiumRacingS.

There is very good speed present with Ayers Rock likely to be adamant of crossing and leading. With only a 200m run to the tight first turn there will be a tight battle for the spots behind him. This leaves the ones drawn wider to be disadvantaged. It is expected they will bowl along at least at a genuine speed.

Our Market:
This market is of our systems ‘raw’ prices which is set to 100% with every runner rated >$21 eliminated. PRS clients get a market <100% on a wagering sheet which also blends in the public price of each runner to find a wagering edge. 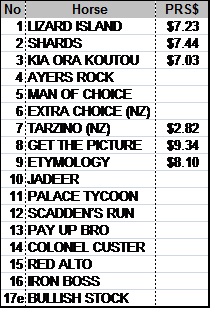 As you can see on our raw market, we believe the race to be thinner than what the public markets suggest.

LIZARD ISLAND – Another bold effort in Caulfield Classic when backing up from the good run in the Guineas. Was well backed on the week back up. Certainly not crying for 2500m compared to others but has run well in everything thrown at him this campaign; excluding 1st up run when bombing the start. 5/8 seconds frustrating but rates well once again with him having six runs into this, a positive pattern historically.

SHARDS – New PB last start behind Jameka last week in Vase. Rolled along at an even speed at the front on a good day for them. Hugh Bowman now on is beneficial although that now makes it 6/6 new riders this prep. Isn’t expected to fight for the lead. Backing up off PB can rate down as expected but still go ok.

KIA ORA KOUTU - Perth galloper. Smashed in betting last two to start $1.60 in both and win them well. Beat the older brigade in recent start. 4/4 is one that we know will run out the trip. Query is whether he has the class against the Melbourne & Sydney brigade.

TARZINO - Spiralling performances to date, always a positive factor in any race. Last three runs all been excellent Derby trials against some good 3YOs. More than any other runner in the race he is likely to appreciate the extra distance. With more luck coming from well back can use the larger track to attempt to sprint down the outside this time like his win second up and swamp them late.

GET THE PICTURE – Did run on well in the Caulfield Classic after a good run prior in the Stutt Stakes. Yet to run badly. Loses nothing with Oliver now riding, in saying that Zahra is in red hot form but is now suspended. 3/5 seconds frustrating and will need to improve again but is capable of doing just that. May get a higher premium on the price due to the trainer.

ETYMOLOGY – Was much better in the Caulfield Classic last start after a bit of a disappointing run here prior when very well backed. Is more of a class ‘grinder’ of a stayer compared to some of the more modern turn-of -foot stayers. Is interesting McDonald rides this Godolphin runner but he has ridden him in his last two. Can marginally improve and threaten.

Recommended Bets:
Am happy to back the overlays on our market. Wouldn’t be surprised to see the favourite drift out slightly closer to the jump.