Cox Plate day is one of the great days of Australian racing. In the 'fishbowl' that is Moonee Valley, it's a unique test for elite thoroughbreds with the crowd closer than any other major track in the country. Last year signified the arrival of the internationals. Not the first time they'd come, but the first time they'd cracked it. Now it can be done, will the floodgates open?

Once again, for premium Aussie racing, you need premium analysis and that comes from Premium Racing Services, @PremiumRacingS.

Looks a very high level edition of the race with the majority of runners already producing a performance rating above the historical benchmark required to win the race.

We have quite a high predicted pace rating for this race, even if excluding the presence of The Cleaner in the race who is sure to lead. 2/3 runs this campaign he has led at too slow a pace for him but suspect with some good speed to try and cross to be behind him it is doubtful that will occur again here.

Many of major chances in the race will be in the speed battle, particularly the three internationals. Gailo Chop in particular will find it hard to not be caught wide into the first turn.

Our Market:
This market is of our system's ‘raw’ prices which is set to 100% with every runner rated >$21 eliminated. PRS clients get a market <100% on a wagering sheet which also blends in the public price of each runner to find a wagering edge. 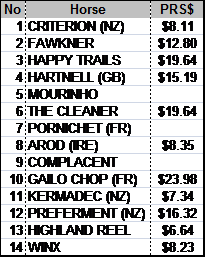 With so much class present in the race, it leaves our ‘raw’ market to be extremely open with very little value present.

Rated runners:
CRITERION – First-up off a let off from a UK tilt did very well to win Caulfield Stakes coming from well back. Second-up pattern off a break good including in autumn when close second in good G1. Has rated higher than last start in past, including over this trip in the Queen Elizabeth in autumn. Settling closer is a winning chance.

FAWKNER – Ridden forward in the Caulfield Stakes and struggled a bit. Was labouring home late. Efforts prior strong including G1 win in the Makybe. Ran superb in this race last year when favourite. May ride cold. Has shown in the past off the very uncommon flat run he can fully bounce back up at next start which is expected here.

HAPPY TRAILS - Good effort in Caulfield Stakes, was a new PB rating. Being his 55th start must presume he rates down here like previous occurrence when producing a new PB. Still not the worst.

HARTNELL - Second-up advanced in Turnbull when ridden conservatively from wide alley. Expect they will try to settle closer, likely will be about midfield as the speed will attempt to quickly cross him. Did produce a PB G1 win in the autumn third-up last prep. McDonald sticking on this Godolphin runner beneficial.

THE CLEANER - Freshened off another bold effort in Underwood, went too slowly in front and was beaten in a tight photo. G2 Dato win here prior very tough when going at the correct speed for him, +5L faster than par. Even more than last year this will be a harder task to lead all the way with so much class behind him. We know he will give his all.

AROD – One of the more interesting runners in the race. 1st up. Talented galloper whose last two starts in particular have been massive collateral figures for this. No disgrace becoming 2nd behind Solow last start in a strong rating mile. Has won 2/2 at trip (excluding 2092m run at York). With Williams on will be on the speed and if he can bring a similar performance his recent starts can certainly win.

GAILO CHOP - Freshened off an easy G3 win last start on heavy ground in France. Has two figures solid for this, a G1 win and a second behind Solow both in France. Map is the issue, likely to be caught wide with the short run to the first turn. Not worthy of having a ticket on.

PREFERMENT - Last two wins strong but not by large margins. Did well to round them up in Turnbull in a blanket finish, common occurrence in Melbourne G1 WFA races so far this spring. Nash going on is good but will he be too far back off the speed? Very rarely see a runner come from the last pair to win when The Cleaner is setting a hot pace. Not overly desperate to have a ticket on him.

HIGHLAND REEL - Freshened off a one-pace run behind the best horse in the world, Golden Horn, on wet surface. Dry track wins prior excellent, including Arlington win in the US which rated over 1.5L superior to Adelaide’s in the same race prior to coming here. With Ryan Moore coming to ride he will be in the speed battle and must be expected to rate near his best into this. Our top-rated runner.

WINX - Was a superb Doncaster win when overcoming adversity on the turn. Has such an impressive turn of foot. Good decision by Bowman to ride this mare. Excellent SP profile and we know is 2040m not an issue. The query is how far back she will be from The Cleaner upon settling. Will need to get rolling much earlier than desired to be any chance. May settle closer? Still cannot rule out the Epsom winner.

Recommended Bets:
Back the overlays which are present on our market late in betting excluding 3,10.