The four-day Flemington carnival closes with my favourite race of the week (indelibly linked to the pocket), the Emirates Stakes. The handicap metric mile is always a cracking race, and there's a great mix of formlines to decipher again this year; the new Aussie star at the mile, three internationals with one local run behind them, the Kiwi gun who sets a sizzling pace, the ex-WA star and several more you shouldn't underestimate (roughies have a strong record in this race - just four winners under $10 since 2000, and only eight since 1983).

After so much rain on Thursday and three days of racing, who knows what the track is going to do. Time to take in the advice of the sharp guys at Premium Racing Services, @PremiumRacingS, and look at the forecast.

Is certain to be genuinely run with five to six horses wanting on pace positions. Like last start expect Turn Me Loose to cross and lead outright. With enough runners drawn to the inside likely to dig up and park behind him it leaves the likes of Coronation Shallan & Arod to find it difficult to find cover within 2-3L of the leader. 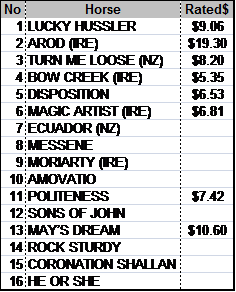 As you can see on our raw market, it is a very open race. The three current overlays are all backing up from Derby Day.

Current overlay runners:
DISPOSITION – Was quite surprised he race on Saturday in a Group 3 and he was certainly too strong for them after a bold ride from Oliver. Excellent SP profile backing up back to a mile, a trip he has run two G1 2nds recent in Rupert Clark & Toorak Handicaps. 11/12 quinellas so far shows he can very must be trusted and expect him to go close.

POLITENESS – Springboarded in G1 Myer on Saturday to win it producing new PB rating, was a good run against the pattern for the meeting. Backing up hard a good move, generally restricts how much they do rate down compared to a traditional break or freshen up. Can still rate down and with plenty of speed late threaten again.

MAY’S DREAM - Caught three wide when midfield in G1 Myer last Saturday but still stuck on soundly to the line. Backing up into this a wise move. Map a small issue but we do have her finding cover. Coming into a race with more speed present is worthy a play at the current large price.

Recommended Bets:
Although not overly confident, there are some overlays present worth backing.