And to complete the set of Cup previews, it's over to regular Aussie feature race contributors, Premium Racing Services, @PremiumRacingS.

These factors are considered annually in this race, and do include the internationals:
• Personal best career run in their prior race
• Abbreviated autumn campaign of three races or less
• 5th up
• Have had to have run a race this campaign in Australia
• Progressing into the race - form is on a gradual rise

As any speed map with two dozen horses present it does look busy on paper, with Big Orange the one likely to push on and try to lead. Prince Of Penzance then has the opportunity if desired like his last start to be in the early battle. Snow Sky will be in the first few also. Am unsure whether Gust Of Wind’s connections intend on pushing forward also like in Caulfield Cup last time. As like every cup there will be horses trapped deep around midfield/off-midfield and the horses drawn the wider gate will likely be the ones to do so.

Our Market:
This market is of our system's ‘raw’ prices which is set to 100% with every runner rated >$21 eliminated. CP clients get a market <100% on a wagering sheet which also blends in the public price of each runner to find a wagering edge. 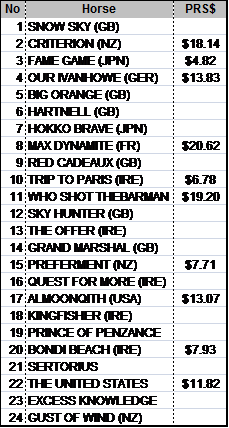 As you can see on our raw market, there is some value present. The public market is expected to change on race day as Fame Game inevitably drifts.

Current overlay runners: OUR IVANHOWE – Third up advanced again in the Caulfield Cup when looming up and looking the winner for two strides before the eventual winner raced clear. Is fourth up into this, prefer if he had one more run but no doubt he is fit. Gate is a little worry, likely has to settle further back than desired. Collateral figures in Germany are very strong for this race and if the rain hits the track it will only benefit him.

TRIP TO PARIS – Certainly ticks a lot of boxes into this race. Excellent performance in the Caulfield Cup when staying to the inside and working through the line very well. Beat third and the rest of the field quite well. Like international horses that have had starts in Jul/Aug at home. In June he also obviously won Ascot Gold Cup over 4000m. Having a start already in Australia which was also an =PB rating are significantly positive factors into this race. Can win.

PREFERMENT - Never in the Cox Plate race, stablemate obviously dominated. Efforts prior solid including Turnbull Stakes win here. In the past runners, in particular Efficient & Green Moon for Lloyd Williams, have raced flat in the Cox Plate and bounced back in the Melbourne Cup to win. Those two runners were utter stayers like this entire, unlike a star like Fiorente who was accomplished over shorter trips. Comes into this fifth-up with a current dominant jockey/trainer combination this spring.

BONDI BEACH – The most talented on the UK starts and am shocked at his current price compared to his UK counterparts. Last three starts all rated strongly in his short career thus far. Also have been between 2400-2900m so doubt the 3200m will be an issue. Having runs in late August- mid September beneficial for this. The major query is that he is yet to have a start in Aus for this. Although obviously an overlay am only prepared to have a place ticket on him.

THE UNITED STATES – Bold effort and super ride by Hugh Bowman to win MV Cup. Bowman comes off for Moreira so doesn’t lose too much there although the Magic Man hasn’t shown anywhere near his best form outside of HK where he is winning over a quarter of his rides. Last start was a PB performance, but was that his peak performance? Carrying the light weight with a cosy run may get away with rating slightly down or similarly and still threatening.

Recommended Bets:
Back the overlays on our market, excluding BONDI BEACH who you can have a place ticket on staked proportionally to a number you’re comfortable with.