Business insurance based on sporting results

Last year during the Rugby World Cup, a few people with little understanding of modern business practices were surprised to learn that nations such as Australia had 'bet' on their success by way of sports insurance firms. This is very common in professional sport with virtually every athlete having some type of performance bonus in their contract. Win a tournament, break into the top 10, qualify for the Champions League etc. - sometimes they are personal bonuses, other times they are major windfalls for the club. Imagine how much Chelsea money will 'lose', or more correctly, not receive, from not qualifying for Europe this season. Accountants run businesses these days, and they hate volatility. Just look at bookmakers moaning about results. The actual bookmakers understand this is part and parcel of the betting industry, but the bean counters and shareholders despise them.

This not only affects players and clubs, but sponsors and businesses linked to the sport. Danny Willett's sponsors would have received great exposure out of his recent Masters win, but it's highly likely they had to stump up a big wad of cash to the player as well, as part of a performance-loaded contract. One contract bonus deal which did hit the headlines was Lance Armstrong vs. SCA Promotions. Armstrong's contract was loaded with bonuses if he won the Tour de France, and his team had to insure the bonuses, as per his contract. The insurance firm refused to pay out, citing evidence that Armstrong had doped. Armstrong took SCA to court and won, the first time around. Once Armstrong was exposed for being a serial cheat by USADA, SCA returned fire and got their money back. They are several of these sports insurance firms around, but unless you are involved in the trade, it's unlikely you'd have heard of them. You will have heard of Wimbledon having rain insurance during The Championships, and retailers such as Curry's paying bonuses to customers depending on the success of England at the World Cup. These are sports insurance deals; it's nothing new but it is starting to have wider ramifications in the business community.

Imagine you own a pub this summer and most of your business is during live sport, particularly football. How much do you think your revenue would differ for the month of the tournament between England making the final and England bombing out in the group stage? It'd be a massive variance and you'd have already committed to the overheads - TV and sound upgrades, decorations, promotions etc., before considering the staff costs, which you might be able to minimise.

Siepe Sports allows businesses to insure their event-based trade against poor performance, and thus loss of revenue, by paying a premium. 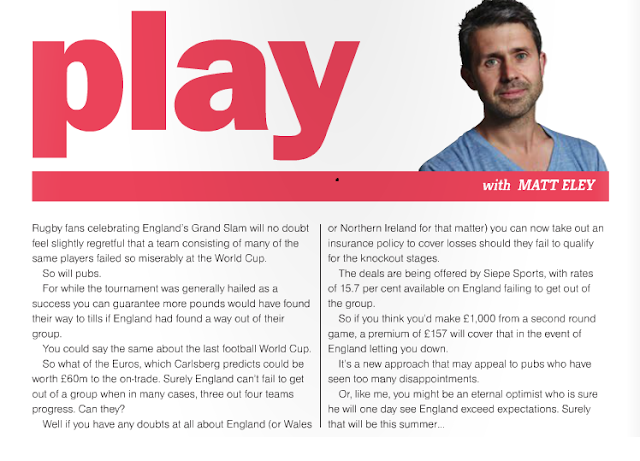 Don't be caught out by circumstances you can't control, insure your business against poor England sporting performances and keep your accountant happy!

For information, the founder of Siepe Sports is a close friend of the author and no sponsorship benefits have been received in return for this post