The Grand National - narrowing down the field

Merely nine days away from the race that captures everyone's attention in Britain - the Randox Grand National. Going runner-by-runner through the forty starters is hard work for anyone, so Stephen Boardman has started his homework early...

With a couple of weeks to go until the race that has many a once-a-year punter scratching their heads, I thought I'd give them a helping hand with a run down of some statistics that could point the way to the winner this year.

Having looked through the last ten winners, and using my own ideas of what I believe you need to be a National winner, I've come up with seven key points to focus on:

A top 2 finish in a chase of 3m 2f+
The ability to perform well in a chase where emphasis is on stamina seems an obvious prerequisite for a Grand National winner. Even with the reduced distance these days, it's still the longest race in the calendar and if you can't stay you won't win.

A top 2 finish in the Hennessy, Becher, any 'National', 3m+ chase at the Cheltenham/Aintree Festival or 3m+ Grade 1 chase
The National day, and the race itself, creates a lot of buzz. Therefore, the ability to deal with the big occasion is extremely useful when attempting to win the National. So previous stand out performances in similar scenarios can prove useful.

A top 2 finish in a chase with 16 or more runners
The helter skelter nature of the National can catch some horses out if they haven't experienced something similar before. A history of coping with a crowded field can only be a plus.

At least 10 chase starts
Knowledge and experience are very useful tools coming up against the demands of the National. With horses all around you and unusual fences to negotiate, being streetwise is a tick in the right box.

Number of runs during current season (from October)
With the National being in April, there's been plenty of time to build up to the day during the season. You often find winners of the race have had a handful of runs (three to six) in the lead up. Not too many races as to have burnt themselves out and not too little as to be lacking the robustness needed for the fight.

The month during which the last run occurred
Winners of the race tend to have had their last prep run during February or March. This way they are kept ticking over nicely, just at the boil and ready for their effort come early April.

A top 2 finish in the last three starts
Coming into the race I'd like a runner to have shown some kind of form of late. To attempt to win the National having shown very little enthusiasm for the game in recent times is a tough ask.

Using the criteria above, the below table shows how the previous ten winners matched up against these points heading into their Grand National:

As you can see, the ideas formed above lend themselves quite well when coming up with what you need to be a National winner. Clearly there are many other statistics available and many people don't like the idea of using statistics at all. This is just my personal opinion and above all else, it's an enjoyable way for me to narrow down the field.

All the ten previous winners pass the seven criteria, apart from Neptune Collonges having a top two finish in a chase with only 14 runners and Auroras Encore having had no recent good performance to speak of. However, a 97% strike rate across the 70 individual cells is decent and there's bound to be the odd anomaly that crops up.

Looking at the class of 2017 I decided to initially apply the first three columns (as these seem quite key) to the current list of entries all the way down to number 45 (excluding Vics Canvas). If there was a runner who came very close to meeting one of the criteria I have highlighted it in orange and allowed it through to the next stage. 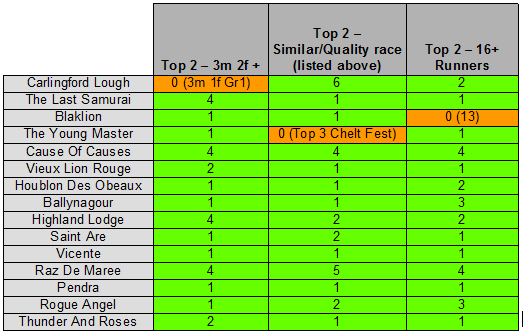 Immediately we are down to 15 runners from the initial 45, with three of those having an orange marker against their name. Following on from this, using the 15 that passed the first stage, I pitted them against the next four criteria which produced these results:

As all of the previous ten winners have passed at least six of the seven criteria we are now left with nine runners:

Hopefully the winner of the Grand National 2017 is in the list above. To narrow it down even further though, I feel that once we reach this stage it's all about visual clues and trusting your gut. We have the statistics to back us up but now we can delve a bit deeper into what each has achieved.

The Last Samurai
Placed both times in races over the National fences; much higher in weights than when second last year but carried 11st 12lbs around when a close third in Becher back in December; Many Clouds proved big weights can now win around here and it's easy to see a big run as this will have been the aim all season.

Cause Of Causes
Has peaked in the Spring for the last four Cheltenham Festivals; lots of form in staying chases; had spin around Aintree as a 7yo behind Many Clouds (should be stronger now as a 9yo); trainer having a great season; obvious claims.

Saint Are
Had plenty of experience over the National fences; only 4lbs higher than when second to Many Clouds; not getting any younger but if he gets the Good ground he loves he is a big price at his current odds.

Raz De Maree
Lots of fine efforts over marathon trips; twice a Cork National winner (including this season); almost caught Gold Cup third Native River in the Welsh National back in December when thundering home; another with age against him but will see off plenty given his stamina reserves; chances.

Blaklion
Fails on the same statistic as Neptune Collonges did and comes here on the back of a second in the National Trial at Haydock (also like Neptune); however while Neptune was gaining all the way to the line at Haydock, Blaklion was plugging on and the visual impression he gives is that he won't stay better than others; when factoring in the price he is now it means I'm happy to pass on him.

Houblon Des Obeaux
Fails on current form (as Auroras Encore did) but has the back form to potentially overlook that; Venetia Williams saddled Mon Mome in similar circumstances to win in 2009 (off the back of a Midlands National run); comes here from 4lbs lower than Welsh National third early in the season and was a Grade 2 winner last year; another who could outrun his odds.

Vicente
Fails on current form; only 1lb higher than for his Scottish National win last season but seems to be getting worse as the season goes on this time around; could excuse him that, as Auroras Encore showed, but he was 66/1 whereas you're only getting 25/1 about Vicente; for that reason he's a pass from me.

Pendra
Fails on number of runs this season (too few); wouldn't have qualified for any of the first three statistics were it not for his latest second in the Kim Muir at the Cheltenham Festival; long time off before that run so has to muster another big effort in short space of time; overall profile doesn't appeal greatly so he's also passed over.

Thunder And Roses
Fails on number of runs this season (too many); Not the most consistent but has decent form in staying chases; Irish National winner (defeating last year's Grand National winner into second place) who would probably be more at home in the Soft ground; folly to rule out should the rain fall.


N.B. Further down the list of entries Bless The Wings (49) passes all seven criteria and becomes interesting on Good ground at current odds of 100/1.

Extra N.B. Vieux Lion Rouge fails on two criteria but if he had run once more this season he would also pass all seven. Thinking about his form over the National fences, the fact he's now 6lbs ahead of the handicapper and the visual impression he gives, I would consider it wise to have a smaller saver on him to cover your entire National stakes should he win.

Happy punting and enjoy the race on 8th April.