The InterDominion, I love it. The mightiest test of a standardbred horse, three rounds heats and a final over just 15 days, horses need to be as tough as old boots and stay sound. It's a carnival I've been to numerous times but unfortunately being stuck on this side of the equator these days, it has been quite a while now (2004) since I last attended. But that won't stop me previewing what looks to be a cracker of a final.

For those not so familiar with the layout of Gloucester Park, it is a flat circuit with minimal camber with a distinct advantage to the inside, particularly the leader. Approximately 800m (straight only 143m) around with nine horses off the front row on a mobile start, it's a great venue on a warm summer night. It's also the last of the Australian metropolitan trotting tracks with an inner-city location. It's that venue you see over the back of the WACA during the cricket coverage.

Courtesy of tab.com.au, these are the market fluctuations over the course of the series until just after the barrier draw.. 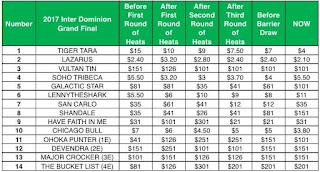 Tiger Tara - the biggest story of the final is this horse drawing the pole. Dead set leader who will not hand up, and thus making life very difficult for the favourite (and every other runner naturally!). Just a $15 shot to start the series, he enters the final in peak form with a win (from the pole) and two seconds. With such a savage bias towards the leader (widespread stat of the week - 46% of leaders win at GP), which of his rivals will serve it up mid-race? This is a $1.1m race, they can't just sit and wait, especially without a sprint lane. Does anyone challenging off the mobile? Who attacks after the first lap? Does fending him off attacks for much of the trip leave him vulnerable to the late challenge? You can absorb attacks over the shorter course and still win, but over 2936m, that collective effort mounts up.

Lazarus - the current star of Grand Circuit racing, having 39 career starts for 32 wins and seven placings. Bolted in yet again in the NZ Cup when rival drivers were resigned to running for second. That's not the case here and it's going to be very tough for him to find the rail. There are calls that he has struggled on the flat Gloucester Park bends, losing rhythm and metres to the leader each time. Didn't appear to hurt him too much setting a track record last week over 2536m from gate #7 but few drivers are willing to overtax their horses in the heats; it's different here. Not blessed with the greatest of gate speed, it's unlikely he goes forward off when the arms peel back. How far back does he end up? When does he make his move? Without doubt the best horse in the field but there's no way I'd be taking odds-on about him. Corporate bookies will have long-term liabilities on him, but that won't concern the on-course or Betfair markets. Will be interesting to see what price he gets out to tomorrow night. If he gets to 2.5, I'll be tempted.

Vulcan Tin - 14% win strike rate, only ran 3-4-6 through the heats and no shorter than $25 in any of those races. Nothing more than nuisance value.

Soho Tribeca - local star who ran favourite in his three heats, running 1-1-2. Can lead, can go back but trainer/driver has stated his intention to go back at the start. Beat Lazarus and Chicago Bull in his two heat wins, both times severely advantaged by the draw. Has finished no worse than third in his last 14 starts, but is yet to prove himself in the biggest races. Place chance, doubt he's quite up to winning.

Galactic Star - ran 3-1-5 through the heats and the win was a surprise. Started at $60 in the Victoria Cup from a better draw, and this is even harder. Got left in the dust behind Lazarus last week when behind leader at the bell, another with no hope.

Lennytheshark - InterDom champion of 2015 who's not had the best of luck in WA this year and needs a fair chunk of it here. The draw of gate six is not a nightmare in isolation, but with all of his rivals drawn far better, he's been pushed out to the fifth line of betting. Yet will anyone else inside go forward and challenge Tiger Tara? His gate speed is exceptional but if any other horse kicks up, he risks being caught three-wide into the first bend. The favourite isn't quick enough early, Kim Prentice on Soho Tribeca has stated he'll probably go back, so unless the #3 or #5 have a crack, he might get to the death seat fairly easily. Any false step from Tiger Tara and Lenny could even cross. One quirk in his career - he hasn't won in this distance range (placed three times from four starts). His ID Final win here in 2015 was over the shorter 2536m trip. Champion who has amassed $2.8m in prizemoney and only missed a place six times in 73 starts, the thing that gets me most interested in him is the price - I'm guessing he hasn't started in the $15 range since he won the NSW Derby in 2013 paying $37!

San Carlo - won a heat last week drawing the pole while Soho Tribeca drew nine and Lennytheshark seven. Roles reversed this week, he's going to have to work every hard to put himself into contention and the others have bigger motors. Great record, winning 21 of 27, but none of those compares to this field.

Shandale - local who beat Chicago Bull & Soho Tribeca here back in October, but again, with a substantial draw advantage. Ran 3-4-5 through the heats and while you could make a case for being driven to reach the final, it's much harder here. No hope.

Have Faith In Me - superstar who ran the fastest ever mile in Australia (1.47.5) in the 2016 Miracle Mile (February), but has only won two of his subsequent 18 starts. Looked a lot more like the champ of old last week when he came around the field mid-race (providing Lazarus with the draught), sat outside the leader, let Lazarus go past and cross him, refused to concede the death seat when Vultan Tin ranged up and then kept running in the straight to only be beaten 1.7m in a track record. The scary part though, was Lazarus still looked to have plenty in the tank! Horror draw outside the front row, has no choice but to go back, make a mid-race move and hold on for dear life. If he manages to flush another horse out ahead of him to get the draught around the field, you just never know if the blowtorch has been applied to the leaders. Huge price, worth an each-way nibble.

Chicago Bull - won two heats when conveniently drawn one or two. Only finished third in the Bunbury heat when drawn the second line. Best of the locals who landed the plum draw of sole second row runner, parked directly behind the obvious leader. Needs to hang onto the tail of Tiger Tara and hope he never hands up the lead. At GP, there's no sprint lane, so he'll need luck to get clear when it matters. If the pressure is cut-throat, that should make it more likely, but if it's just the leader wilting, he risks getting dragged back through the field. Great record of 27 wins from 42 starts, but I reckon his price is too reliant on luck. Can't see any value in his win price.

Lazarus
Have Faith In Me
Tiger Tara