Fabulous race here with a big field of flying fillies. Some of them have started their careers in fine style, others will step big steps forward from their debuts. That's the beauty of 2yo racing, it's far more than just the bare form on the board.

Baileys in Bloom - unfancied on debut and quite erratic leaving the gates, but showed a good turn of foot when asked, to score at Beverley. Doubt that form is particularly strong but showed enough to believe she will get better with more racing. Very early foal (Jan 12) which is beneficial in early part of the season.

Chasanda - 25/1 winner on debut then beaten by a couple of today's rivals at subsequent starts. More exposed than all bar one of these, and trainer known for hitting the ground running, rather than steady progression. Will be a big price.

Companion - won by a nostril at Yarmouth on debut against a Godolphin runner who was beaten at odds-on earlier this week. Not sure about the strength of form, but entitled to respect with de Sousa aboard a Mark Johnston-trained filly.

Fleeting Princess - impressed with a comfortable win on debut at Yarmouth, with seemingly plenty left in the tank. Jeremy Noseda has had great success with his juveniles this week, for two wins and a third. Drawn in the middle to park nicely in behind the pace, wherever it is, and has the master, Ryan Moore aboard. Hard to beat.

Galadriel - has picked a hot race to make her debut in. Given the connections, you'd be surprised if they were wasting their time. Big watch.

Good Vibes - won a nice conditions race at Salisbury despite racing greenly, beating a previous winner. Might kick on but there's no room for rolling about in the straight in this class.

Great Dame - nice win last week at Chester on a track heavily favouring leaders. Probably less up the sleeve having three runs but she will almost certainly be in the mix for a long way.

Infinite Grace - stablemate of Great Dame, and finished close behind her at Ripon on debut. Jockey booking suggests they're not expecting a great step forward.

Lady Fanditha - winner on debut for Clive Cox who doesn't usually throw them in the deep end without good reason. Respect.

Lady Kermit - flying machine who routed the field on debut at Kempton, then followed up a fortnight later with a comfortable win at Newcastle. Archie Watson's juveniles have started the season in briliant form - does everyone else start catching up now or do the better ones keep on going? Clearly ahead of these on ratings, will she transfer that ability to turf?

Lady Quickstep - backed from 25s into 16s when winning by four lengths on debut at Brighton. Hard to knock good form but beat one of Archie Watson's weaker fillies on that occasion, now she's up against the very best of them.

Macho Touch - ran freely when beaten almost 10L behind Lady Kermit on debut. Trainer's 2yos always make a big improvement at their second start but at least much is needed.

Mighty Spirit - missed the start on debut and ran on nicely to run second to Lady Kermit, probably the season's best 2yo so far. Likely to improve for the run, but how much exactly?

Ruby Wonder - second to Baileys In Bloom on debut and then repeated the result again at Beverley without an improvement in rating. Third string from the O'Meara stable on jockey bookings.

Separate - Hannon runner, second on debut at Newbury, likely to be rated highly in a traditionally strong juvenile stable. Frankie aboard, drawn next to Fleeting Princess.

Silver Start - won on debut at Bath, not a venue I'd automatically associate with the starting point of high-grade racing careers, but I have been assured otherwise by none other than Charlie Hills himself! 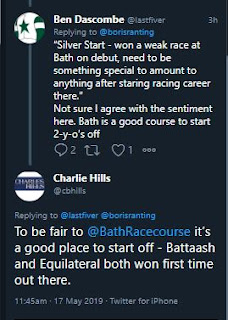 Taste The Nectar - played up pre-race before finishing one length second to Fleeting Princess on debut at Yarmouth. Connections not known for 2yos, one to keep an eye on.

Inclined to go with Fleeting Princess based on debut run and stable form this week. With plenty of untapped potential here, the price will be decent enough in this field. Kevin Ryan must have a high opinion of Galadriel to pitch her in here and Separate to fill the placings. Lady Kermit sets a high benchmark but not sure if she's a 'March champion', brilliant on debut then the others who are prepared with more patience soon catch up.