Cometh the rain and early darkness, cometh the jumps season. The National Hunt caper in the UK & Ireland is more devoutly followed than the Flat (yeah, baffling to me too), emphasised by the fact all the other interest to provide previews this week was for jumps features.
So it's welcome aboard to newest blog contributor, Jonny Gatenby, @JonnyG88, a talented young writer with a passion for National Hunt racing.
==============
The Bet365 Charlie Hall Chase
Grade 2, £100,000. Three miles 45yds.
3.40 Wetherby GMT.
The race was originally established in 1969 and has been called the Charlie Hall since 1978. It is the first graded three-mile chase in the UK of the season and was seen for many years as the start of the season ‘proper’. This is probably not the case anymore with big meetings at Chepstow and Cheltenham preceding this one but one thing that does remain is the fact that the Charlie Hall is the first Cheltenham Gold Cup trial of the year. Seven horses have been declared this year trying to emulate previous winners such as Wayward Lad, Barton Bank & Ollie Magern.

There is no better place to start than with last year’s winner Definitly Red who tries to join previous back to back winners Celtic Shot, One Man & See More Business. I’m not sure Definitly Red is worthy of a mention alongside such legends of the winter game but that may not stop him joining them as a back to back winner of the jewel in Wetherby’s winter crown. Trainer Brian Ellison is in a rich vein of form going into Saturday’s big race with 10 winners in October so far, and more specifically six out of nine chase runners hitting the target. Conditions will be no issue to Ellison’s stable star but I think he may just be out-gunned by one of the ‘new kids on the block’

Current favourite with sponsors Bet365 is superstar mare La Bague Au Roi. The apple of trainer Warren Greatrex’s eye she carried all before her last season winning 4 times and landing Grade 1’s at both Kempton & Leopardstown. While some of the horses she beat may be shy of top class some of her form has been franked at the highest level. Last Christmas she came out on top of future RSA Chase winner Topofthegame (who has sadly been ruled out for the season this year). She also saw off Colin Tizzard’s Grade 1 winner Lostintranslation, who runs at Carlisle on Sunday, on her chase debut at Newbury. La Bague Au Roi is two from two at Wetherby, one of her wins being in the 2017 renewal of the Bet365 Mares Hurdle, which is another highlight on this very card. She also seems to go well fresh winning on her seasonal reappearance in 2015, 2016, 2017 & 2018. This all adds up to make a compelling case for the 8-year-old and it seems hard to see her out of the frame for regular pilot Richard Johnson.

Next up we have local hero Top Ville Ben. He has been the real market ‘springer’ since the betting was made available on Monday. Quotes of 16/1 were soon taken and he’s around half that price now. He won three novice chases last season, including two at Wetherby itself. He has proven to be recalcitrant in the past and has fallen a few too many times for comfort including at the 2019 Cheltenham Festival. I’d expect a bold show from this front-runner without him being good enough to trouble the judge. He could be one for Wetherby’s Boxing Day highlight, the Rowland Meyrick.

Trainer Colin Tizzard won the Charlie Hall with stable legend Cue Card in 2015 and runs Elegant Escape in a bid to land this year’s prize. Elegant Escape won the Coral Welsh Grand National last season and stamina is definitely this one’s forte. The rain may have arrived to assist this ones chances with a decent amount now forecast to fall during the course of proceedings on Saturday. This is on top of last weekend’s torrential rain that left Wetherby’s back straight flooded as recently as Tuesday. 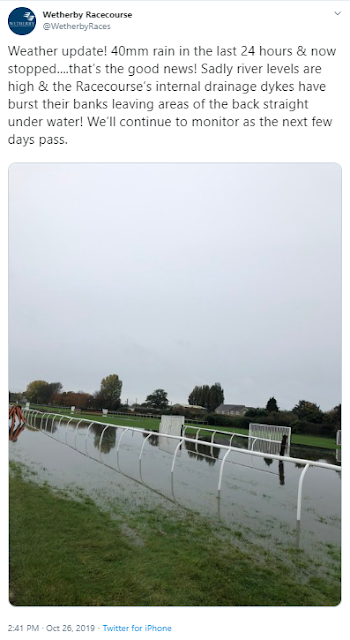 I can't help feel this is a stepping stone towards the Betfair Chase at bottomless Haydock or even a tilt at something like the Becher Chase at Aintree over the famous Grand National fences.

Sam & father Nigel Twiston-Davies combine with Ballyoptic. He is sure to be fit and well after a win at Chepstow a fortnight ago. The 9-year-old also has course & distance form landing the 2018 renewal of the Towton Novices Chase. The balance of his form makes him hard to recommend for win purposes but he will be sure to try make fitness count against any of these that might just need it ahead of a long winter campaign.

Dan Skelton was the leading trainer at Wetherby in 2017/18 with brother Harry landing the jockeys prize last season. The dynamic duo team up with Molly The Dolly here. She was well placed last year landing races at Aintree, Uttoxeter & the Scottish Grand National meeting at Ayr. She is well suited by the conditions of the race and is running off bottom weight of 10 stone 7 pounds. She is being highly tried here and it shows the regard in which the Skelton’s hold her. She should win plenty of races this season, possibly back against her own sex.

Completing the field is Venetia Williams Aso. He's the only one to have never won over the trip and if this becomes a real stamina test given the likely pace on and the forecast rain this will surely count against an unproven stayer that likes to be ridden handy. He certainly has the form to go close in a Charlie Hall but conditions may have just conspired against him this time.

Verdict
There seems to be a lot of pace in this race on paper and conditions look set to deteriorate as the day goes on. It may just be a case of whoever is most patiently ridden and connections comments regarding jockey instructions will be be worth noting beforehand. I think the conditions of the race really suit the two mares lining up and La Bague Au Roi is the clear form pick. For betting purposes I'm going to suggest an each-way play on the Skelton's outsider MOLLY THE DOLLY. She could be held up off a strong pace with less expected from her than her other more prestigious rivals. I can see her picking a few off in the straight and reaching the 1-2. She is unproven compared to the rest at this level but she's a girl on the up and we've no idea how good she could be. Follow her for the rest of the season win, lose or draw in the Charlie Hall. Elegant Escape may be the one to prosper most if the race becomes a war of attrition.