Royal Ascot comes to close with the traditional G1 finale, the Diamond Jubilee Stakes. No sign of any Black Caviar in this field but it is a cracking contest with a trio of four-year-olds at the top of the market who I expect to be genuine Group 1 sprinters by the end of the season, if not tomorrow afternoon. Can make a case for all of these, don't correlate the amount of detail supplied directly with their chances! 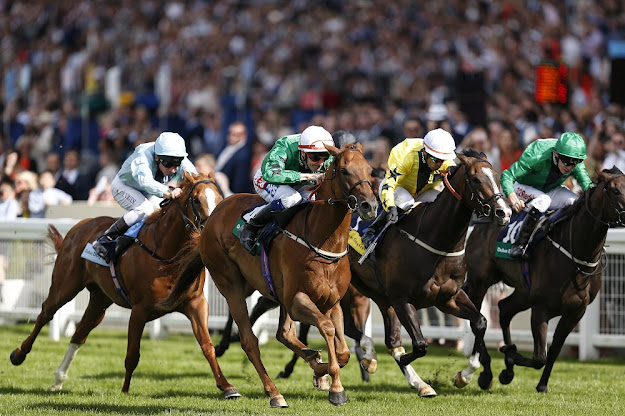 ----------------------
The Diamond Jubilee Stakes
G1, 6f, £250k
1535 local, 0035 Sydney, 1035 New York
Expected track condition - Good
1. Dream of Dreams - beaten a head by Blue Point in this race last year, his season then tailed off, leading to the infamous two stone weightdrop over the offseason. Hasn't the best conversion rate with eight seconds and only four firsts, but if in the same form as this time last year, must be a chance with Ryan Moore aboard.
2. Hello Youmzain - flying machine in the Kevin Ryan stable who ran third in the Commonwealth Cup last year and followed it up with victory in the Sprint Cup at Haydock. Big chance.
3. Khaadem - Hamdan al Maktoum owned, Jim Crowley ridden. A recipe for plenty of winners this week and don't be shocked if there's another here. He'd need to improve his record against Hello Youmzain though, 0/3 when they've met. Said to have had a foot issue leading into his flop in the Champion Sprint. Top end handicapper, not yet in a G1 for me.
4. Sands of Mali - flying machine at two and three with a second in the Commonwealth Cup and victory in the Champion Sprint but not much went right last season. Top class at best but needs to show some form before one can have confidence in him.
5. Sceptical - a wonderful rags-to-riches story this season. A Godolphin blueblood, by top notch sprinting sire Exceed and Excel out of Queen Mary winner Jealous Again, he was sold unraced for just £2800 and landed in the Denis Hogan stable in Ireland. Five starts later, he has won with ease four times in a row and goes into his first Group 1 as favourite. His win is Listed company at Naas almost two weeks ago was effortless, he has a high cruising speed and then scoots away when asked for an effort. This is a considerable step forward but one I find hard to deny he is ready for.
6. Shine So Bright - resumes after 253 days off but not to worry, he is three from three first-up in a campaign (min 100 days off), including wins over Group winners Space Traveller and Laurens. This isn't the most difficult G1 field, right in this.
7. Speak In Colours - fourth in this race last year at 50/1 and likely to be at the back end of the market again. All five of his wins have been at six furlongs, repeated attempts at 7f have shown that he just doesn't quite stay the trip. That includes his lead-in run, when beaten by Lancaster House (who will win a G1 or G2 this season) at the Curragh last weekend. Gains the services of William Buick. Blowout chance.
8. The Tin Man - grand old warrior still holding up a mark of 117. Hasn't won for almost two years but did run Hello Youmzain to half a length in the Sprint Cup at Haydock last September. Lining up for the fifth time in this race, with a record of 8-1-4-6. Can't see another '1' being attached to that string.
9. Breathtaking Look - G3 winning mare who ran the highly promising Oxted to a length off level weights in the Abernant at Newmarket recently. That 4yo gelding was high in the betting here before diverting to targets later in the summer. Aiming very high here but won't be disgraced.
10. One Master - remarkable world travelling mare who hasn't won in Britain since 2017. Instead she's won Group races in Ireland (1xG3) and France (2xG1), and finished one length back in the Queen Anne and Champions Sprint here at Ascot last year. I'd prefer her over 7-8f but first-up, this suits her well. Another with a genuine shot.
SUMMARY
This is bloody hard, you can make a real case for all of them. I note Pricewise and Paul Kealy have both gone for Shine So Bright and I can see why. Brilliant first-up record, wins over high class opposition and the tough 6f should suit at this stage of his prep. Not to mention the price, he should be much shorter than the current 12/1 available. I'll put up One Master as the main danger but not so keen on her current odds - people are starting to catch onto how good she is.
Shine So Bright 12/1