Derby Day at Flemington is the pinnacle of the racing year for me, unfortunately it's now up to 17yrs since I was last able to attend! Not that anyone else can this year either. A day full of Group races (4x G1, 2x G2, 3x G3) and quite simply, if anyone invites you to a wedding on this day, you shouldn't be friends with them any more.
Whilst it's labelled 'Derby Day', the Derby simply isn't a feature race worthy of the eponymous title. A 2500m race just three months after horses turn three simply doesn't lead to great racing. The field is poor, with no depth, just highlighting how many owners are traditionally happy to run to get owners' tickets for the greatest raceday in the southern hemisphere, if not the world. Imagine running the (English/Epsom Derby) on the first of April? At least the Kentucky Derby at the start of May, is run at 2000m, which is about as far as any American-bred horse ever wants. All the east coast Derbys in Australia used to be run in the spring - then those states north of the Murray River decided it made more sense to run them later in the season when the horses were better conditioned to run that far. We don't see 2yos running over a mile before March in Aus, or August (I think) in the UK & Ireland, so why run over a mile & a half (or further, it's actually 2500m at Flemington) so early in the season? If Racing Victoria want the VRC Derby to become relevant again, either reduce the distance so it becomes a genuine progression from the Caulfield Guineas, or shift it to the autumn to keep the full distance. It should be a stallion-making race, or one that tests rising stayers. Right now, it is neither.
So my preview is on the big handicap of the day, the Cantala, a G1 quality handicap over the metric mile. Always one of the hardest races of the year to decipher and one of my favourites. 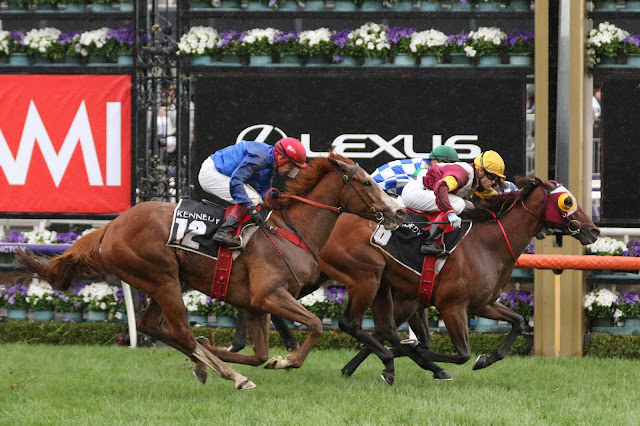 That sets the race up nicely for Nonconformist to come home over the top of them.
Nonconformist 11/1
The Velvet King 40/1
Wild Planet 11/1
Yulong Prince 12/1