The highlight of Saturday's racing, at least for me, is the Tattersall's Irish 2000 Guineas. An intriguing battle of the colts where at least, in comparison to the Newmarket equivalent, every horse has had a run this year, in theory making the puzzle a little easier to decipher. One cat amongst the proverbial pigeons though will be the weather. It was already classed as Heavy on Friday, without much chance of respite before the meeting.

No sign of crowds at race meetings yet in Ireland, a darn shame for a great racecourse like The Curragh, but let's hope management have managed to sort out the whistling grandstand issue. 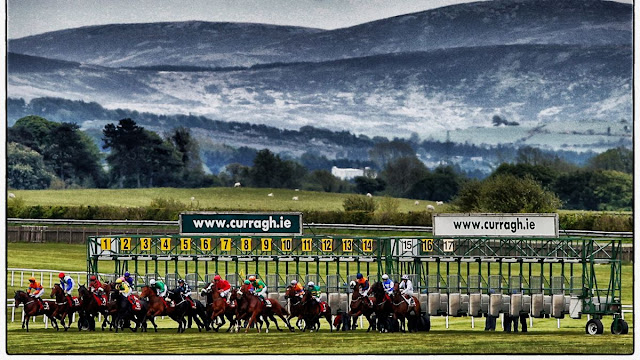 One of only two runners not from a multi-million owner/trainer, and has the form to earn his place. No worse than second in his three starts, breaking his maiden last time out in beating Emporio at Gowran Park. On that occasion he settled closer to the lead and ground out the win in the latter stages (first and second finished 6.5L ahead of third) rather than running on encouragingly after the leader had kicked clear. Handy form but it's around a lot of AOB/JOB 3yos which seem to be well down their respective stable rankings. I think capturing a decent race is within his range, but more likely G2/3 rather than a classic. Trainer/jockey combo is worth following - six winners from 17 starters in the past 30 days, for a level stake profit of 48.58. In the wet, has gone OK so far on soft, unknown on worse.

Was truckloaded late at Newmarket from 8/1 into 9/2 to run favourite in the 2000 Guineas but ran terribly, beaten 20L ahead of only the equally disappointing Thunder Moon. The post-race examination revealed no medical issue but the stable report was that he lost his action and was unsuited by the undulations of the Rowley Mile. Stable confidence was obviously high but on jockey bookings, he appears to have been relegated to third in the pecking order. A slight concern is some War Front colts don't train on as 3yos - Air Force Blue, War Command, Hit It A Bomb for example, but this could easily be a case of confirmation bias on my part. On his 2yo form winning at Royal Ascot (soft track), Glorious Goodwood and being unlucky at the Breeders' Cup, he is right in this, but the jury is out for me.

Five-start maiden (four seconds) and the weakest of the field on official ratings. Can't see him being competitive here.

One of two British raiders in the field, one assumes this colt doesn't rank in the top bracket of Godolphin juveniles having not run in the English equivalent three weeks ago. His form is strong, winning his first two starts in races which have held up well, then failing in the deep ground of the Criterium International at Saint Cloud in late October, behind Van Gogh. Ran second to stablemate Master of the Seas in the Craven, beaten under a length. On face value, that brings him to the top of the chances here but the heavy ground is a big worry. Can't discount him completely based on a sample size of one, but I'd want to be compensated accordingly in the price for taking that risk.

A gutsy third at Newmarket, he is likely to start favourite because the winner has blighted his form since and the Ballydoyle trio are hard to split.

Unseen on heavy ground, we're guessing if he can handle it but consider these angles:

- he is already booked to go to stud later this year in Australia so the owner will be chasing a classic no matter what
- he's by the same sire as La Barrosa, who failed dismally in one attempt on heavy ground
- progeny of his sire Lope de Vega as less than half as effective on heavy ground as they are on good (15% winners/runners vs 33%), and it's even worse on the damsire side, Cape Cross - 35% vs 13%.

That's more than enough for me to swerve him, especially at 2/1.

The supposed no.1 from the Bolger stable who missed the Newmarket race won by the stablemate Poetic Flare. Instead he went down the Derby route, but appeared not to stay in the Derrinstown, beaten 6.75L by Bolshoi Ballet. Switched back to the mile, he is the one runner with a big tick in the 'mud' column, having won the G1 Futurity Trophy at Doncaster on the heavy in October. All three of his wins have been with cut in the ground - yielding, soft, heavy. After winning at Newmarket on the stablemate, you wouldn't expect Kevin Manning to switch rides unless it was bleeding obvious that one was better than the other, but the form of jockey Rory Cleary must be a slight concern. He hasn't had a winner for two months and only four  for the year, out of circa 100 rides. Temper that with being stable no.2 and not riding a lot of horses under 10/1 but it has to play on the mind. Although, if it was Padriag Beggy or someone similar from Ballydoyle, would it matter? Definite chance, at least you know he swims.

Third behind Poetic Flare in the Guineas Trial at Leopardstown last month, when he settled a couple of lines behind the winner and was unable to make up any of that ground. Ran in good company last season, narrowly beaten by Chief Little Hawk and High Definition at his final two starts as a 2yo. Not much to work on re heavy ground but his sire did win his final start in heavy going by 8.5L. Promising, but his dam was beaten out of sight in both her starts on similar ground. Jockey could be in better form, just one winner from his last 40 rides, and that was on a 50/1 shot. Right in this if can handle the wet.

Running in his third Guineas in 21 days after victory at Newmarket followed by an uninspiring sixth at ParisLongchamp last weekend. He was being ridden along off the turn there and didn't get going until the final stages - a run which could best be described as flat.

Had they been easy on him since Newmarket, were there issues with travel protocols, was he unsuited by the 'very soft' going, is he now looking for further? The Newmarket win caught a few by surprise but was certainly no fluke.

The other low-profile runner in the field and for good reason. One win from eight starts, most of his form is against lesser stablemates of big stables' entries here. Beaten over 10L in only run on soft/heavy going last season. No hope.

British raider chasing some 'cheaper' black type. Beaten 6.25L in the Craven (5.5L behind La Barrosa) first-up, he was handy as a 2yo (comfortably won a Novice at Salisbury, third in a Listed race at Pontefract) but doesn't strike me as a classic contender.  Starspangledbanner progeny don't stand up well comparing good ground against heavy.

Seemingly the mudder of the field, with his career-best performance being in the G1 Criterium International last October. Never really got into it at Newmarket, perhaps feeling the ground, certainly wasn't pushed out in the closing stages so expect more to come. Unsupported in the market that day, it'll be worth noting what the 'lads' do here. Definite chance if he has trained on.

Withdrawn from the Futurity last October due to unsuitable ground (heavy), you have to be a tad concerned here on this surface, although he has solid form on soft and soft/heavy. Said to have 'not handled the downhill aspect of the good to firm ground' in the English classic, when he was beaten 18L. Close up seconds to Thunder Moon and St Mark's Basilica in Group 1s last season, if at the top of his form, he should go very close. Ryan Moore aboard so we assume the stable think he is back in form, although it's also sticking with the Newmarket hierarchy. Favourite for me but with a question mark.

A baffling race with so many queries against the main contenders. Difficult to have any real confidence without watching the early races to gauge how deep the ground is, but I'll take a punt on Van Gogh. At around 7/1 at time of publishing, at least that compensates for some of the doubts.