A step back towards normality this week with the running of the Epsom classics in the traditional time slot, with at least a few paying customers. An intriguing battle awaits, we've not yet seen a star filly emerge and I'm convinced the front pair in the market are there on stable reputation alone. Bring it on. 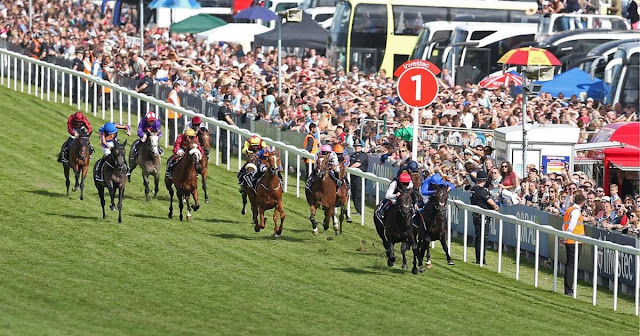 A full sister to Arc and Breeders' Cup Turf winner Found, this filly has a long way to go yet, with a record of 1/6 so far on the track . Her best two perfomances have been on rain-affected tracks and that's not happening here. Found has five other full siblings, none of whom have reached a level high enough to win a race such as this. She will start significantly shorter in price than the three rivals who beat her at Lingfield, and that's just nonsense.

Trainer Mark Johnston seeks his first Classic win at Epsom with a promising filly  who claimed the Cheshire Oaks last time out. In hindsight, you could probably say the smart ride (by the King of Chester, Franny Norton) was the key factor with the runner-up more than a touch unlucky, beaten a length at the line. Norton is 2-2 on this filly and at Epsom, he has a slightly better than 25% winning strike rate for Mark Johnston, winning 10 times from 39 rides. Likely to lead or sit on the pace, breeding says they'll have to work hard to get past her.

Regally bred as a Frankel half-sister to Irish Derby winner Santiago but she's a maiden after six starts and finished 8L behind Dubai Fountain in the Cheshire Oaks (backed from 15/2 into 9/2 that day despite Ryan Moore riding the stablemate). Assume she will be sent to the front as the pacemaker because there's not much point being here otherwise. No chance.

The most exposed filly in the field, with 11 runs under her belt for George Boughey and Nick Bradley Racing. She's a good working class horse, very honest, collecting cheques at nearly every start, predominantly in lower grades and an absolute delight for her owners, but a Classic winner I think not.

Guaranteed to stay, by Australia out of a Theatrical mare but the real question is will she be fast enough? Form to date is more G3/Listed calibre than blue riband. Beaten 3L by Noon Star on debut, followed by a winter novice win on the all-weather, she had six months off before finishing third in the Lingfield Oaks Trial. Being first-up and stepping up half a mile in just her third start, there's good reason to expect improvement, but it will need to be significant to get in the frame here.

If this filly was trained by Aidan O'Brien or John Gosden, she'd be pushing for favouritism. She has had four starts, all at Newmarket, and progressed each time according to Racing Post Ratings, running second in the Nell Gwyn and 1000 Guineas this campaign. So why the big differential in price? Jane Chapple-Hyam & Adam Kirby isn't the sexy pairing of Aidan O'Brien & Ryan Moore, and there will some concern over her stamina. Racing only over 7-8f so far, she doesn't appear to be crying out for an extra half mile. Her sire New Bay won the Prix du Jockey Club and ran third in an Arc but the dam side screams miler. If for nothing else, an underdog story breaking the recent history of blue bloods and breeding & training empires would be a pleasant change.

The hype horse of the season who started joint favourite in the 1000 Guineas off a maiden win and a ridiculous volume of stable whispers. Unsurprisingly at just her second start, she seemed a bit lost in the hustle and bustle of a top grade race. After racing prominently, she couldn't accelerate in the closing stages and did well to finish within two lengths of her winning stablemate. Was it inexperience, was it the undulations of Newmarket? Either way, I struggle to see how the unique test of Epsom is going to solve that, and especially at her price. She may well improve several lengths but do you really want to pay a substantial premium for that by taking around 5/2? Simply can't have her based on what we've seen so far, lay her all day.

Ran home well to claim second in the Lingfield Oaks Trial, taking a healthy step forward in ratings. While she started 12/1, she finished ahead of all bar the rank outsider winner Sherbet Lemon. Has shown steady progression this season, place chance at odds.

Hollie Doyle's first ride in the race on a filly who claimed the Lingfield Oaks Trial at her more recent start. She doesn't seem to be the easiest horse to handle, dawdling out of the stalls and hanging left in the straight, which will only be magnified by the Epsom camber, but there has been steady improvement in her three runs to date. Still, there's a decent gap between what she has done so far and what is required to win a Classic. Unlikely but may challenge for a place.

After winning just one of seven starts as a 2yo, she was sent off at 14/1 in the Musidora and stole it via a smart front-running ride from Ryan Moore. Or perhaps she matured considerably over the winter, enabling her to make a giant step forward. By Japanese superstar Deep Impact out of a sister to Arc de Triomphe-winning Found, the bloodlines are there for her. Moore has elected/been designated to ride the favourite, so Frankie Dettori gets the chance aboard the one with the form on the board in comparison to Santa Barbara.

Surprised a few running second to Wirko in the Blue Riband Trial here in late April but then couldn't live up to the hype in the Lingfield Oaks Trial, beating only one rival home. Perhaps the soft ground was partly to blame but it wasn't a particularly high rating race. Plenty more needed to be competitive here.

First of a pair of strong chances for Roger Varian, this daughter of Sea The Stars blew her chances in the Musidora at York by playing up in the stalls then pulling hard early. There wasn't much left in the tank when she pressed her claims with 2f to go and finishing only 4.25L from the winner was a solid effort in the circumstances. She was mighty impressive in her two appearances last season, capping it off with a 9L romp at Newcastle. If the stable can calm her down, she is right in this and they've gone with trying a hood. Jockey bookings are irrelevant here with the stablemate having a retained rider for Shadwell, I am struggling to split her and Zeyaadah.

With the sun out and a Test match at Lord's, here's an omen bet for anyone who wants to find the lamest reasons to back one. She'll certainly be a much bigger price than at recent starts, running third as 11/4 eq fav against older fillies in a G3, and beaten nearly 10L in the Salsabil at 5/4. Impeccable breeding by US Triple Crown winner American Pharoah out of four-time G1 winner Peeping Fawn (second here in 2007), but not proving quite up to expectations.

Undefeated as a juvenile, she resumed in the Cheshire Oaks, running second to Dubai Fountain without a great deal of luck. She was hemmed in on the home turn, allowing the winner to kick 3L clear, and with only a short straight on the Roodee, just ran out of ground to catch the winner. That dispelled any stamina doubts on my behalf, she has run home well in all of her races and with staying blood more evident on the damside. Big chance.

More than happy to take on the O'Brien fillies, and if I end up with egg on my face, then so be it. Roger Varian holds a very strong hand here, so much that he could even claim the trifecta. A good pace is assured with Dubai Fountain and at least one of the Coolmore roughies likely to set a strong tempo. This can set the race up perfectly for Zeyaadah, with her main danger being Teona if they can get her to settle in the first-time hood.