The track is dry, the rain is another day away and the theory is the grandstand rail is the place to go. Let's bring on day two! 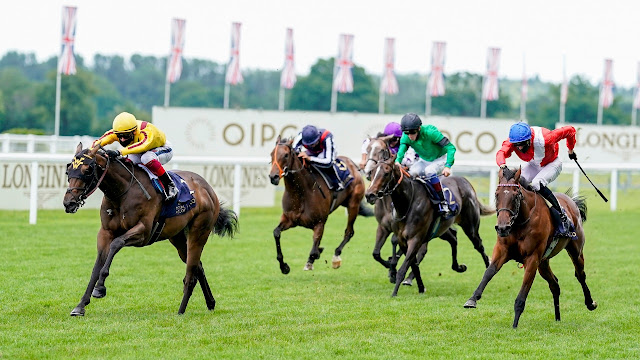 Some trends to whet to focus the selection filtering. Since 2002:

1. Artos (2) - American raider for George R Arnold II who I must confess I've not come across before. Ran second to the highly-rated Ruthin on debut then had this amazing win at Churchill Downs at her next start - this has to be seen to be believed! Red silks, black epaulettes and cap. But after watching that, how's she going to cope with the Ascot straight? Will gate 2 be an asset or a liability? The form has proved strong, the second horse, one of Ward's, has since won a stakes race. Obviously being ridden by Dettori is a plus but there's a huge risk premium with this filly.

2. Beautiful Sunshine (6) - speedy filly from the first crop of Ardad (Windsor Castle winner 2016), for this season's breakout trainer George Boughey (12 wins from 28 2yo turf runners, 42.86%), and the new powerful ownership group, Amo Racing. Steady progression in all three starts to date, started fav but was 4.5L behind Desert Dreamer on debut, then won novices at Windsor and Sandown, each time for the unlucky Rossa Ryan (broke a collarbone four weeks ago, recovered then got appendicitis so he misses this meeting). Equal best peak RPR of the field with the benefit of three runs while most rivals have only had one or two. Sets the standard of the exposed fillies.

3. Cheerupsleepyjean (15) - a promising winner on debut then started fav over Castle Star in the Listed Flier Stakes and flopped. Has had a freshen-up since, would be competitive is stepping forward off her debut run. Could be a silly price.

4. Choux (21) - pulled up an incredible plunge at Thirsk on debut, being crushed from 40/1 into 100/30 in the last five minutes before the jump, and winning comfortably. That takes some impressive co-ordination! This is a decent step up in grade, she was entered in Ebro River's National Stakes but didn't take her place. Whatever she does now, I imagine the owners are in profit, so why not throw her at the bigger trophies. By Exceed and Excel, whose progeny have a solid record here.

5. Coup de Force (18) - beaten almost 9L by Beautiful Sunshine on debut, then made significant improvement to win a restricted Novice race next time at Chepstow at 28/1. Needs to find a fair bit more to be in the finish here.

6. Crazyland (13) - winner on debut at Windsor then went to York for the Listed Marygate and ran third behind Nymphadora (reopposes here) and Canonized (won on Monday night at Windsor). She was a bit wayward out of the gates on that occasion, didn't seem to cost her but a similar performance in a field of 22 might be. Clive Cox can win juvenile races at Royal Ascot but does seem to be the stable number two. This girl's pretty quick and has drawn right in the middle to give her plenty of options.

7. Desert Dreamer (7) - undefeated in two starts, showing good acceleration last time after being blocked at Newmarket, dashing away in the final stages. Beat some good ones on debut - Beautiful Sunshine, Nymphadora and Canonized, also at Newmarket. Not from a yard renowned for juvenile winners but they do know how to prepare a sprinter. Needs to progress but seems capable of doing so.

8. Eve Lodge (19) - NON-RUNNER flew home to claim third on debut at Ascot, after being blocked 2f out. Then went to Lingfield and effortlessly won a restricted novice. Has changed hands since but stayed with Charlie Fellowes. The Jamie Spencer hold up ride style seems to suit this filly perfectly, and drawn in 19, she should get a dream trail behind Coup de Force and Twilight Dreaming, assuming she can keep up!

9. Get Ahead (3) - assumed to be the no.1 from Clive Cox, won here on debut ahead of Eve Lodge (note the second horse El Hadeeyah then finished down the track behind Choux). Shades of Blue ran third in this race for Clive Cox in 2018, beaten a nose by a nose, after winning that same race on debut. Final Song also finished third via the same route (2017), as did Besharah in 2015, while Rizeena won the Queen Mary in 2013 but with a run in between. Historically a strong form race then and has the services of the Derby-winning jockey aboard. Big chance.

10. Harmony Rose (8) - most experienced of the field with four career starts. Thereabouts in those runs and placed every time but we're usually looking for one that improves out of the pack rather than a gentle gradient of betterment.

11. Illustrating (9) - won with a decent amount in hand at Catterick on debut, beating a handy benchmark of Instinction (previously ran fifth in the Marygate) and Misty Ayr (also on debut). You wouldn't normally look at that North Yorkshire track for a strong form race but this one seems to fit the bill. Karl Burke has apparently said she is up there with the best 2yo he's ever trained. Definite chance.

12. Jazzy Princess (14) - made her debut in the Hilary Needler at Beverley, soon fell behind out the back of the picture, then knuckled down in the final 2f and caught the eye. Bit ambitious to try her luck here but showed enough to suggest a win in the right company isn't far away.

13. Mas Poder (5) - debuted with an unlucky fourth in the Marygate behind Nymphadora and Crazyland, running greenly and copping a block in the latter stages. Strong form race, a bit of maturity could take her a long way in this.

14. Misty Ayr (1) - third on debut behind Illustrating. No obvious reason to see her overturn the result, but will learn from the experience and that winner has a big chance here.

15. Nymphadora (10) - took a huge leap forward between first and second runs, improving 23lbs on RPRs. On debut, a nice sixth behind Desert Dreamer at Newmarket. Next time, she won the Listed Marygate Stakes at York, ahead of Crazyland and Mas Poder who reoppose here. Drawn the middle, has her chance.

16. Orinoco River (4) - beaten narrowly by Yet in a Dundalk maiden but that seems a hot form race. By War Front, whose progeny tend to love the straight here. Same concerns about Gavin Ryan as in the Coventry, might improve with an early crack at this course and distance.

17. Poppy Petal (17) - Scottish raider who smashed a small field at Catterick last time out. In comparison with Illustrating who also won there, the going was very different so times aren't comparable but there's only 1lb between the ratings on RPRs which is encouraging. On debut, she was second to Little Earl who then was runner-up in the National Stakes to Ebro River. First time seeing dry ground, drawn near the stand rail speed, might be a massive price.

18. Quick Suzy (22) - Irish visitor with progressive figures, ran second in a G3 last time and never worse than second in three starts. Very astute trainer and is another one on the stand rail, which looks the place to be. Right in this on the ratings.

19. Twilight Gleaming (20) - flying machine trained by Wesley Ward. Has run on both dirt (1L second on debut) and turf (7.5L win at Belmont). This is the race Ward has had most of his success in. Hard to assess how she lines up with Campanelle, Acapulco and Lady Aurelia, and notable that the stable have gone for Johnny Velazquez rather than Dettori who has won here for them on several occasions. Expecting her to jump and run, but she might have a bit of competition for the lead.

20. Vertiginous (11) - ran greenly on debut at Bath with a claiming apprentice aboard, massive rise in class here.

21. White Jasmine (12) - disappointed at Haydock last start after starting 6/4 fav. The RPR recorded matched her debut when 6.5L second to Hello You so she'd need to springboard a considerable amount to be in the finish for Hollie Doyle here. Drop back to 5f may help.

22. Yet (16) -  won an Ireland Incentive Fillies Maiden at Dundalk a month ago, just ahead of Orinoco River. They finished a long way ahead of third suggesting a better than average maiden. Loads of talent, Ryan Moore aboard, big chance.

Good contest here, can make a case for plenty of them. The pace seems to be on the grandstand side, the big question is will anything take on Wesley's flyer? If there's a pace battle, I like the chances of EVE LODGE under an ice cold ride from Jamie Spencer. There was 25/1 available early but that price has long gone, quite possibly because of the perceived stand rail bias. Yet and Quick Suzy won't be far away, stalking the pace, and if there are to be dangers on the far side/middle, Get Ahead, Mas Poder and Illustrating lead the charge. The favourite could be anything, but I'd rather take her on unless we se the second coming of Lady Aurelia (built like a 3yo colt) in the parade ring.